Craigslist bypassed Down Under

Google has juiced its efforts to bypass Craigslist and other real estate classifieds sites, adding a new property-listings search contraption to Google Maps.

This morning, with a down-under blog post, Google announced the addition of direct real estate listings to the Australian incarnation of Google Maps, and a similar service is available in the States as well.

"Increasingly, people are heading online when looking for a new house to rent or buy, and from today, we're adding the ability to search for properties on Google Maps," the company says. "We've worked with partners across the real estate industry to provide up-to-date listings, which you can search for directly from the Google Maps search box." 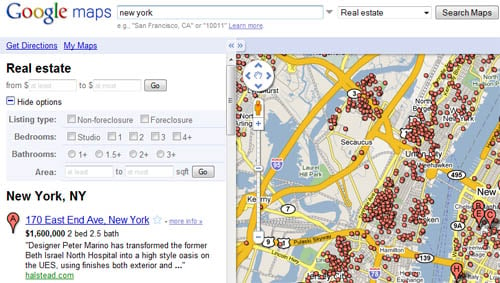 Google Maps was already providing property listings in the US, but the Mountain View Chocolate Factory seems to have expanded the listings, and a new listings search engine provides additional tools for sorting though these classifieds.

"We've had this functionality in the US for a while," the company tells us. "We're now extending it to Australia and New Zealand, and in doing so, took the opportunity to make some enhancements to the interface." The new tech was developed in the company's Sydney office.

You can directly access the service here (Oz) or here (US). But you can also bring up listings by typing, say, "sydney real estate" or "new york real estate" into the main Google Maps search box.

Naturally, all listings are identified with graphical markers on those famous online maps, and you can sort listings according to the usual criteria, including number of bedrooms, number of bathrooms, square footage, and price.

Yes, Google is attempting to sidestep the likes of Craigslist. Such real estate classifieds services - which also include MLS, Zillow, Trulia, and Realtor.com - often hook into Google Maps in order to map their listings.

As Google's Oz blog post points out, some real estate outfits are providing listings directly to Google. According to The Age, the Oz/New Zealand service taps into classifieds provided by the Real Estate Institute of Western Australia and homehound.com.au, a free property-listing service.

But domain.com.au, one of the two largest listing services in Australia, has declined to partner Google - at least for now. "We are quite confident that we provide a better service than Google is offering," a domain.com.au spokesman told The Age. "We are a specialist property portal and we think this will stand us in good stead going forward."

In the States, other organizations have sought to bar listings from Google, complaining that the company likes using classifieds its webcrawlers have scraped from the net at large. Google did not immediately respond to a request to comment on such scraping.

Then, of course, there's the rather creepy thought that in addition to everything else it knows about you, Google can now come even closer to knowing where you live. ®