Mare Nubium poses for the camera 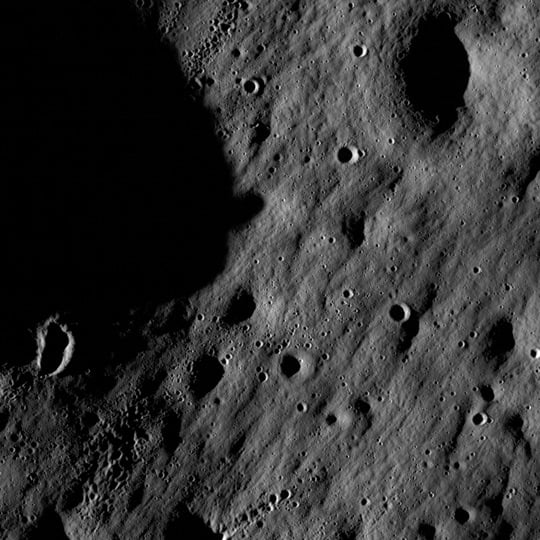 LROC Principal Investigator Mark Robinson of Arizona State University explained: "Our first images were taken along the moon's terminator - the dividing line between day and night - making us initially unsure of how they would turn out. Because of the deep shadowing, subtle topography is exaggerated, suggesting a craggy and inhospitable surface.

"In reality, the area is similar to the region where the Apollo 16 astronauts safely explored in 1972. While these are magnificent in their own right, the main message is that LROC is nearly ready to begin its mission."

The LROC is in fact three cameras: Two narrow-angle instruments, designed to capture "high-resolution, black-and-white images of the surface, capturing images of the poles with resolutions down to 1 meter (about 3.3 feet)".

The other wide-angle camera is tasked with capturing "color and ultraviolet images over the complete lunar surface at 100-meter (almost 330-foot) resolution". NASA adds: "These images will show polar lighting conditions, identify potential resources and hazards, and aid selection of safe landing sites".

In the case of the photo above, taken by the narrow-angle cameras, NASA says "features as small as 3 meters (9.8 feet) wide can be discerned" in the 1,400 meters (0.87 miles) wide slice of lunar surface.

This, of course, comes as welcome news to those of us eagerly awaiting snaps of the Apollo 11 landing site, which will finally reveal whether Aldrin and Armstrong ever really set foot on the Moon. ®