Brobdingnagian arms company Lockheed yesterday passed on a million of its government greenbacks in a subcontract aimed at helping it achieve a new standard in interface tech. The cash goes to Washington-based Microvision Inc to develop "daylight-readable, see-through, low-profile, ergonomic" colour video specs. 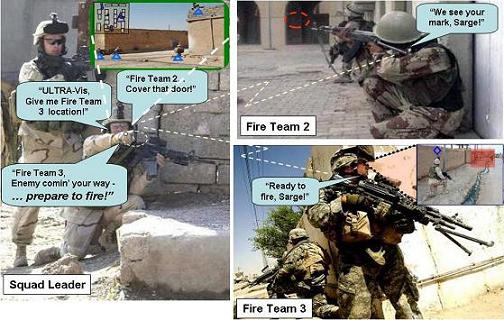 Herat, 2015. Sergeant Johnny Death and his boys hadn't come for a picnic.

The Lockheed-Microvision deal is part of a US military project named Urban Leader Tactical Response, Awareness & Visualization (ULTRA-Vis). It's intended to equip American combat troops not only with see-through video specs but also with a cunning "gesture recognition" interface allowing squad leaders to effectively scribble on the real world - for instance marking a door, and having the same mark show up in their teammates' specs as well.

The PicoP teeny display gizmo is also used in pico projectors, vehicle displays and other kinds of wearable kit.

The ULTRA-Vis project comes, one need hardly say, from DARPA - the Pentagon's one-stop mad scientist shop. Apart from see-through vidspecs and gesture recognition, the final ULTRA-Vis should incorporate "voice and tactile command" interfaces, some sort of location system and a "head-tracking navigation unit" so that the video specs know which way they're pointing.

It would seem to be a race between DARPA and the smartphone app programmers for the futuristic wearable interfaces described by sci-fi writers too numerous to mention here.

There are more details on the ULTRA-Vis programme from DARPA here for those interested. ®