Review Patriot’s first stab at a solid-state drive went by the name of Warp and used the oft-derided JMicron 602 controller. By contrast, the new Torqx series of SSDs makes the switch to the Indilinx Barefoot controller that so impressed us when we reviewed the OCZ Vertex.

From the outside, the Torqx looks reasonably funky. It follows the standard notebook 2.5in form-factor and has a two-part metal casing with a stainless steel base and a brushed black aluminium cover. We popped open the Torqx and immediately felt a sense of déjà vu as it looks identical to the Vertex.

We understand that the Indilinx reference design is fairly prescriptive so the controller goes HERE, the 64MB Elpida cache goes THERE and the 16 Samsung MLC flash memory chips are arranged with eight chips on the front of the PCB and eight on the back JUST SO.

Patriot has chosen to use a blue PCB instead of the green one favoured by OCZ. The casing is Patriot’s own but those are minor cosmetic points.

The specification of the hardware is effectively fixed by the choice of the Indilinx controller, so Patriot’s input comes down to the contents of the package, the firmware and the price. 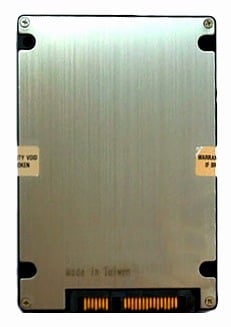 Could be any make of SSD, this way round

The package is fairly basic and consists of the Torqx drive in one clamshell casing and a 3.5in bracket for mounting the Torqx in your desktop PC in a second clamshell. Pricing is relatively steep and we found the 128GB Torqx on sale for the same price as the 120GB OCZ Vertex: just over £300.