Although the Vertex doesn’t require the use of a configuration jumper, it does have a pair of contact pins on the rear of the drive so we treated it as though it was a Patriot Torqx. We installed the jumper, booted into Windows and then ran the 1571 firmware update and - voila - we had a second Patriot drive. 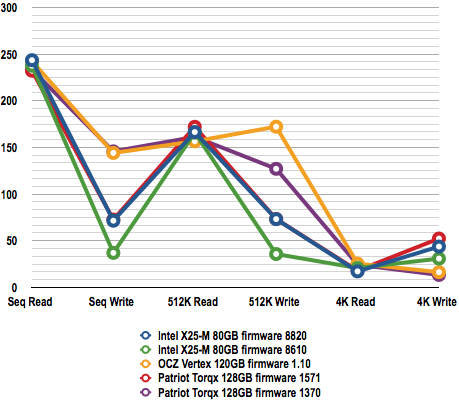 This caused us something of a problem. We love the Vertex for its balance of high performance and reasonable price. We also appreciate the fact that the process for updating the firmware is quick and easy. In contrast, the Torqx looked just a bit clunky and complicated. After our fiasco with the firmware on the OCZ we changed our tune and thank our lucky stars that Patriot was able to resurrect our second SSD.

The Patriot Torqx is very similar indeed to the OCZ Vertex, and also to one or two other SSDs on the market. It performed very well. Shame it couldn’t be just a bit cheaper. ®

The OCZ Vertex under another name but - thanks to a firmware update - it's even faster.
Price: Approx £300 RRP
More Info: Patriot's Torqx page
Page: