Nearly half of the Arctic's thick sea ice diminished between the winters of 2004 and 2008, replaced by thinner ice more likely to melt in summer months, NASA's ice-sheet monitoring satellite has shown.

With what they call the most comprehensive survey to date, boffins from NASA and the University of Washington say that thin ice has replaced older and more resilient ice as the Arctic's dominant type for the first time on record*.

The Arctic ice cap naturally grows each winter and then shrinks during the summer. A majority of the summer runoff comes from ice that had accumulated the previous year. Thicker, older ice is more likely to survive the summer heat and last several years.

Seasonal sea ice usually reaches a thickness of about 2 meters (6 feet), while multi-year ice average 3 meters (9 feet) according to NASA. 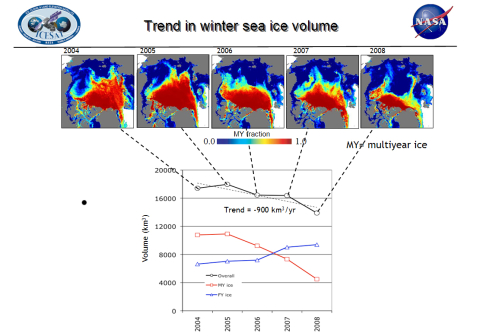 NASA claims the amount of ice replaced in the winter has not been sufficient to offset summer losses in recent years. And more open water during the summer absorbs more heat, warming the ocean and further melting the Artic ice.

"Even in years when the overall extent of sea ice remains stable or grows slightly, the thickness and volume of the ice cover is continuing to decline, making the ice more vulnerable to continued shrinkage," said Ron Kwok of NASA's Jet Propulsion Laboratory. "Our data will help scientists better understand how fast the volume of Arctic ice is decreasing and how soon we might see a nearly ice-free Arctic in the summer."

The Greenland and Antarctic ice sheets being watched by ICESat contain 77 per cent of the Earth's fresh water. If their collective stored water volume were to be released into the ocean, the global sea level would rise about 80m (260ft), according to NASA. Even a small change in the average thickness of 0.1 per cent (2.4m) would cause the global sea level to rise 8.3cm.

The ICESat research team claims the overall thickness and volume of Arctic ice has "thinned dramatically" due to recent warming trends and anomalies in patterns of sea ice circulation.

"The near-zero replenishment of the multi-year ice cover, combined with unusual exports of ice out of the Arctic after the summers of 2005 and 2007, have both played significant roles in the loss of Arctic sea ice volume over the ICESat record," said Kwok.

ICESat is designed to detect changes in ice sheet surface elevation as small as 1.5cm (0.6in) over areas of 100km x 100km (62mi x 62 mi). NASA says the satellite makes it possible for US scientists to monitor changes over the entire Arctic Ocean for the first time, rather than rely on area data from US Navy submarines.

The research team's findings have been published in the July 7 issue of the Journal of Geophysical Research-Oceans. ®

*Scientists have only been studying the arctic ice for about three decades, so it's a relatively small set of data if you're trying to work out long-term global events.