'All systems are in excellent shape'

Space shuttle Endeavour is in "excellent shape" to launch tomorrow on its delayed STS-127 mission to the International Space Station.

The 16-day mission will feature five space walks to fit the final components of the Japan Aerospace Exploration Agency's Kibo lab. NASA has released a fine "Right Stuff" style snap of the crew tasked with the job, but has inexplicably failed to say who's who. Readers will have to determine for themselves which of these intrepid souls is Commander Mark Polansky, Pilot Doug Hurley, Mission Specialists Dave Wolf, Christopher Cassidy, Tom Marshburn, Tim Kopra and Canadian Space Agency astronaut Julie Payette from the traditional cheesy crew snap here: 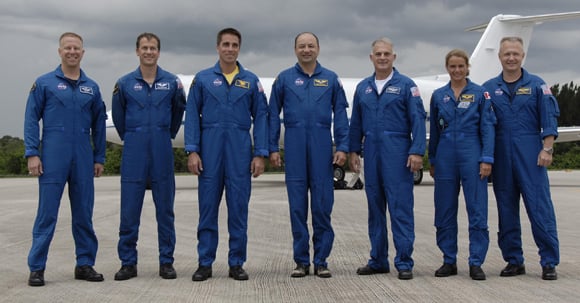 Endeavour is slated to blast off at 7:39pm EDT (23:39 GMT) tomorrow, weather permitting. NASA says the conditions are 40 per cent "go" with "showers, thunderstorms and anvil clouds" expected.

Tim Kopra will replace Japanese astronaut Koichi Wakata aboard the orbiting outpost. Wakata arrived at the ISS aboard Discovery on STS-119 mission back in March. ®