And some web apps (eventually)

Review Microsoft has released a technical preview of Office 2010. This is a pre-beta release intended for feedback, as well as promotion, so it's not feature-complete and may change before the final release planned for the first half of 2010.

Nevertheless, it offers a fair guide to what Microsoft is planning for its ubiquitous office suite. The short summary is 'more of the same': more of the controversial Office Ribbon UI, more features for products that arguably have too many already, and more integration with SharePoint so that users are drawn deeper into Microsoft's platform.

At the same time, the company is looking perhaps nervously at web-based Office suites from Google, Zoho, Adobe, and others and responding with Office web applications of its own, while carefully avoiding any suggestion that they might replace the desk-bound versions.

"I wouldn't give up the full capabilities of my Office applications on my PC," says Office product manager Monica Mendoza. "But isn't it great to know that you can access your Office files from anywhere, directly in a browser?" Considering the importance of Office to its bottom line, you would not expect Microsoft so say anything else, but it is a complex message to articulate. 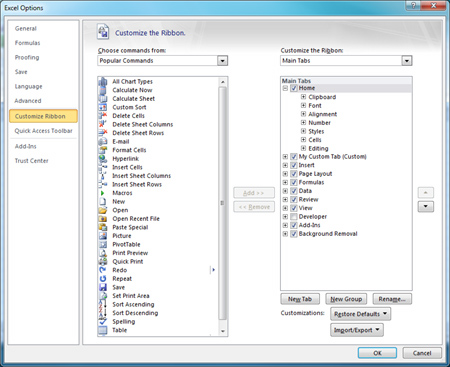 Customize the Office Ribbon, as you could with the pre-2007 toolbars

The big themes of Office 2007 were new XML-based document formats, which sparked a ferocious standards war, and the disappearance of menus in favour of a fat-tabbed toolbar called the Ribbon. Web apps aside, there is nothing so radical here. Office 2010 feels more like a refinement of the earlier version. The Ribbon is now extended to Outlook and Publisher. One crumb of comfort for Ribbon-haters: a "customise the Ribbon" option has appeared, letting you add and remove tabs, groups, and individual commands.

As for Open XML, it's notable that Microsoft neglects to mention it at all in its Reviewer's Guide, even though this is supposedly the release that will fully implement ISO/IEC 29500. It is odd how this has gone from a cause to campaign for, to not-worth-mentioning in just over a year. To be fair, few users ever cared about XML formats themselves: it is only when documents get scrambled or fail to open that such things become important.

So what is new here? 64-bit versions for a start. They're now an option throughout. The most obvious use is gigabyte-size Excel spreadsheets, though working with any large document should now be easier. Excel also gets a new single-cell chart type called a Sparkline and a new Slicer tool for filtering data. Some features turn up throughout the product.

The Office Button - really a file menu, and one which some new users find hard to discover in Office 2007 - has been replaced by a Backstage view, combining file, preview, and document options into one full-window dialog. It sounds odd, but it works well. Paste Preview is another new feature, showing an instant preview of Paste actions. 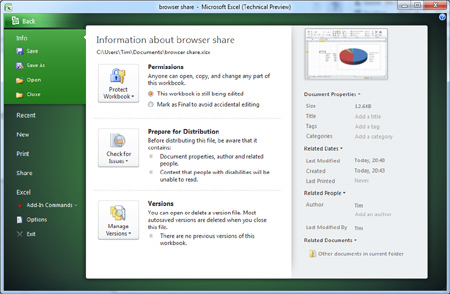 Ideal for product reviewers, a screenshot button lets you insert an image of any open window into the current document. Several Office applications now support simultaneous multi-user editing, provided the document is hosted on SharePoint or Windows Live.