It's a temptation, watching many of the 40th Anniversary retrospectives, to think of the Apollo space program as a triumph of power and industrial might. The superpowers' space programs were, of course, political and chauvinistic, designed to showcase national wealth. But there's a better way of looking at the program, Dennis Wingo reminded me recently. Masses of money helped put man on the Moon of course, but the Moon program is really a tale of engineering improvisation and human organisation.

Space expert and entrepreneur Dennis Wingo put the first webserver - an Apple Mac - in orbit, for just $7m, and has helped piece together a lot of historical material that NASA didn't appreciate at the time - and forgot about, or wiped. There is one piece of kit in particular that encapsulates two stories: NASA's negligence, and the quite amazing improvisation of the engineers. It's the Lunar Orbiter, which mapped the moon's surface prior to manned descent. Wingo painstakingly recovered and restored much of the imagery it took.

To give us an idea of how much Apollo owed to seat-of-the-pants ingenuity, it's worth remembering that the story of the Orbiter begins in 1961 - the year of the first human orbit of the Earth by Yuri Gagarin. The space pioneers were seeing a high death rate from test subjects - dogs (the USSR) and chimps (the USA), the latter proving to be a duff move - the chimps panicked in the claustrophobic conditions.

The US program lagged far behind the Soviets', and NASA's early attempts to keep up had become a national joke. The Ranger had been the first project to photograph the moon, with the modest ambition of crashing a probe onto the surface. But of the first six Rangers, two failed to leave the Earth's orbit, one failed en route, two missed the Moon completely, and although the sixth reached the target, its cameras failed.

Yet by 1964, much of the technology that eventually put man on the Moon had been already designed and built. The colossal Apollo expenditures were on the physical implementation of the program, including the many test flights. By 1965, the Apollo Lunar Excursion Module (LEM) was already being prepared as a long-term shelter and accommodation unit. And as Wingo points out, it was really down to 400 engineers - a fraction of what Google devotes to inserting advertisements into web pages - being given the freedom to put Heath Robinson designs into practice. 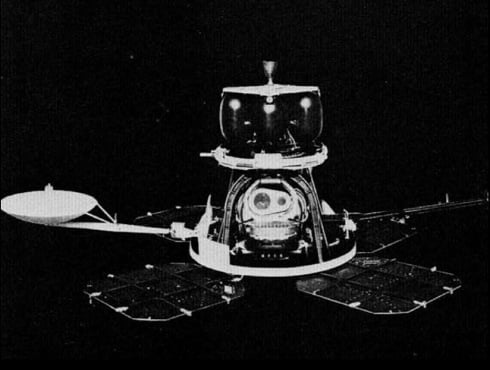 The most successful space mission of all time: the Lunar Orbiter

The Lunar Orbiter astonishes even today. It had to take pictures, scan and develop the film on board, and broadcast it successfully back to earth. Naturally, the orbiter had to provide its own power, orient itself without intervention from ground control, and maintain precise temperature conditions and air pressure for the film processing, and protect itself from solar radiation and cosmic rays - all within severe size and weight constraints. This was far beyond the capabilities of the newest spy satellites, which back then returned the film to earth in a canister, retrieved by a specially kitted-out plane. The Orbiter challenge was the Apollo challenge in miniature.

Next page: "A bunch of plumbers"
Page: