"A bunch of plumbers"

Between 1966 and 1967 the five Orbiters succeeded in mapping 99 per cent of the moon's surface, sending back the first pictures of the Earth from lunar orbit. Planning had actually preceded Kennedy's challenge to put man on the moon. In 1959 a team at the Jet Propulsion Labs under Albert Hibbs had envisaged a survey craft, winning funds for Congress for a Surveyor Orbiter and Lander. The design goal was to capture 100m resolution imagery with an orbiter weight of 950 to 1,100kg (even back then, NASA was metric). By the time Apollo was created, the project had got nowhere in fast in four years. The Surveyor project wasn't even operationally active when Apollo's demanding requirements came through in the summer of 1962.

For a manned vehicle to land safely, the Apollo directors wanted stereoscopic images to identify slopes of seven degrees, and obstacles less than 1m wide or deep. JPL was already over-burdened with existing projects, and the Langley Research Centre (LRC) took over. The LRC would choose and manage the contractors, and approve the technical decisions.

This choice didn't impress the experts. "How in the world could the Langley Research Center, which is nothing more than a bunch of plumbers, manage this scientific program to the moon?" asked the prominent Nobel-prize winning scientist Harold Urey, to NASA's administrator James Webb.

That's an odd question, and reflected the academic snobbery of the time. The private sector, which came to the rescue of the Apollo program time and again, had plenty of talent - particularly in the shape of STL (Space Technology Laboratories).

STL was a division of a company founded in 1953 by Simon Ramo, Hughes' former director of research, and Dean Wooldridge, another Hughes executive, after they had become disillusioned by Howard Hughes' management style. Ramo was the chief engineer on the ICBM missile program. STL said it could could design and build three orbiters in 22 months - using a spin-scan camera rather than NASA's preferred TV camera systems, and weighing just 320kg. In the end, STL wasn't the chosen bid, and the spin-scan was considered too risky. 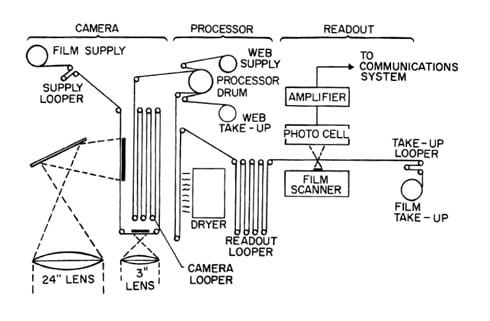 But the bureaucratic arguments continued. The Apollo requirements were revised to identifying 15 degree slopes, 3.5m cones by 1965, and eight degree slopes and 50cm cones in a 1,600m radius area in subsequent missions. The project directors also needed to identify the nuisance posed by space dust (micrometeroid flux, in the jargon), cosmic radation, and solar particles. The twin requirements - high detail over a limited area, and medium resolution over a wide area, were to result in two cameras on board the Orbiter. Yet it was another year before a project office (LOPO) was established under Cliff Nelson, in August 1963.

The Orbiter required three different subsystems - capture, scanning, and transmission. All three, and everything else to get the Orbiter launched, were developed in parallel. The engineers and their managers simply didn't have time to read management theory books. Tech specs were deliberately kept minimal and open ended. Contractors were encouraged to "offer approaches which differed from the established specifications but which would result in substantial gains in the probability of mission success, reliability, schedule, and economy".

The thinking behind this was that the contractors would have to figure out what worked - there was no time for religious affiliations with specific technologies - and the most effective design would win. Of the five contractors who submitted bids, Boeing won - borrowing an Eastman Kodak system already used in spy satellites. 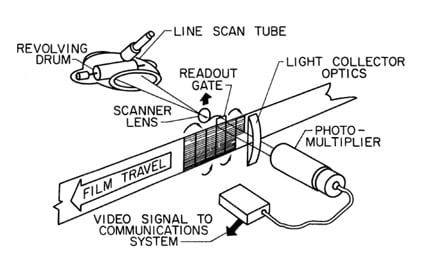 But Eastman Kodak had never had to take pictures quite like this before. The reflection from the Moon's surface is so harsh that everything appears flat. The final subsystem featured two lenses - a high res 610mm lens and a medium resolution 80mm lens, with the output interlaced onto a 70mm strip of film, some 80m long. The slow film permitted high grain resolution and sharp contrast pictures. It was developed using a dry processing technique used by Kodak for the spook satellite cameras.

The Orbiter's raster scanned the negatives with a 5 micron wide, 200 line process (later 2 micron, 500 line). Processing the first results took five hours. Getting the data back to earth was another challenge.

RCA provided the communications subsystem. A 1967 paper available to IEEE members today describes some of the innovations: "A vestigial sideband modulation for the transmission of the picture data, a full-verification command system, a low-gain antenna system whose pattern approaches that of an isotropic radiator over a large portion of the radiation sphere, and a dual-power-level transmission system which does not use RF switching." A lossless analogue compression technique was invented for transmission.

All five orbiters were eventually crashed into the Moon to avoid bumping into subsequent orbiters, and the Apollo missions, but not before taking 1,800 photographs.

Back on Earth, the first published photographs were actually captures from TV sets - it would take 40 years, a lot of perspiration and some good luck before the high resolution images were widely seen for the first time - and bureaucratic neglect almost destroyed them.

The result was the most successful project in US space history - the highest level of operational success. It was the Orbiter that took the first "whole earth" picture (not Apollo) and provided the first pictures of the dark side of the Moon*. Not bad for a "bunch of plumbers".

Apollo at 50? How about 40 years since Skylab smacked into Australia