Kingston’s thinking is that SSDs don’t yet have enough storage capacity to be the sole drive in a desktop PC unless you spend £500 on a 250GB drive. With that being the case, the cost-effective set-up for a PC is to install your OS and applications on a 64GB SSD, and to use a hard drive for the hundreds of gigabytes of music, photos and movies that you have doubtless accumulated. 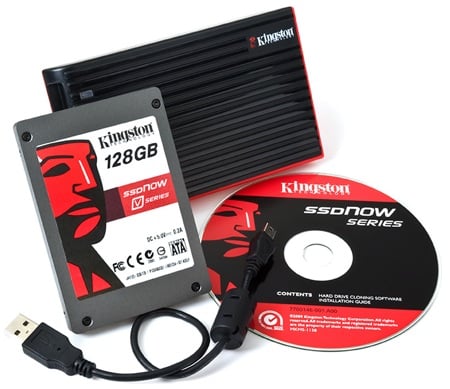 The laptop kit comes with a USB enclosure, the desktop pack with mounting parts

By contrast, laptop owners are probably limited to a single drive so the smart move is to upgrade your hard drive to a 128GB SSD.

Take another look at our test results and compare the performance of the 5400rpm Samsung laptop drive and the Kingston SSD Now and you’ll see that the upgrade will transform the performance of your storage. Clearly, you can get even greater storage performance if you pay a higher price and install the Intel X25-M/Kingston SSD Now M or the Patriot Torqx, but the SSD Now V will do very nicely. When you've been used to the sluggishness of a hard drive in power saving mode you will be startled by the instant response of an SSD.

There are two other clear cut advantages of an SSD upgrade for your laptop. An SSD is utterly silent which is a blessing after the spinny clickness of a hard drive, and an SSD is relatively indestructible. Put it this way, the clever technologies that have been developed by the likes of IBM and Lenovo to protect laptop hard drives from shock damage will become redundant as SSD makes inroads into the laptop market.

With a price of £186, this 128GB SSD can hardly be called cheap but it does represent very good value for money.

Kingston has struck a clever balance between price and performance with the SSDNow V Series and we guarantee that it will transform your laptop. ®

It could be quicker - but it could be a lot more expensive. Kingston's SSD strikes a nice balance between the two.
Price: £186 RRP
Page: