Another stab at router convergence

With a 120GB Fujitsu MHW2120BH installed and a 2GHz Core 2 Duo PC with a 1GB Ram disk (to avoid bottlenecks) attached the other end, transfer speeds maxed out at around 12Mbytes/sec. That’ll be acceptable for most home users, although most dedicated Nas boxes are between two and four times faster. 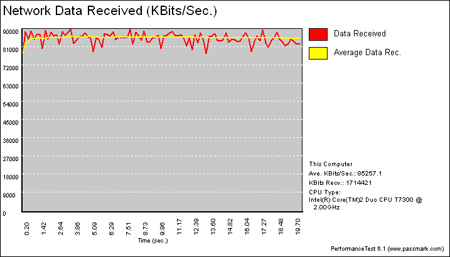 Good Wi-Fi speeds when placed close together, but no killer 5GHz mode
Click for a larger image

It can take just three dual-channel (40MHz) routers in the 2.4GHz band to clog up the airwaves and seriously slow down your Wi-Fi. Even if all 802.11g homes are sensible and use just one 20MHz channel each, there’s only space for six routers on a street. It sounds confusing when there are 14 channels in use in Europe – the terminally keen can find out more about 2.4GHz and 5GHz Wi-Fihere.

If you can detect more networks than that from your home, then upgrading to 5GHz kit should benefit you. For starters, there are very few homes with 5GHz kit and secondly there are 12 non-overlapping single channels (six dual channels), so many more networks can occupy the band without slow-down.

However, the 5GHz band isn’t enabled on the DIR-685, but speeds were good nonetheless. In a typical, noisy, London suburb the DIR-685 averaged 85Mb/s in our synthetic TCP test, and 70Mb/s in a real world Windows Explorer 350MB copy test using an Atheros AR5008 – the Wi-Fi chipset found in many 13in MacBooks. 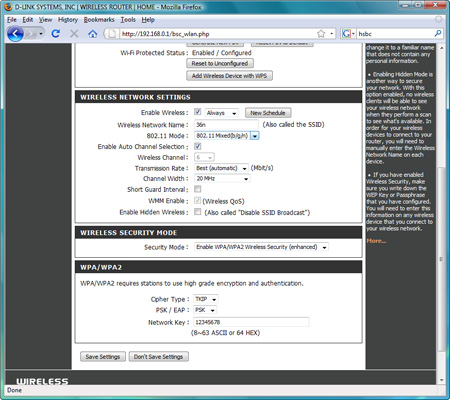 Avoid the standard TKIP setting, says D-Link (and us)
Click for a larger image