Flying 'Motorbike'/Reliant Robin 'to take off next year'

A radical "motorcycle" able to pop out a pair of wings and take to the skies will make its first flight next year, according to reports. 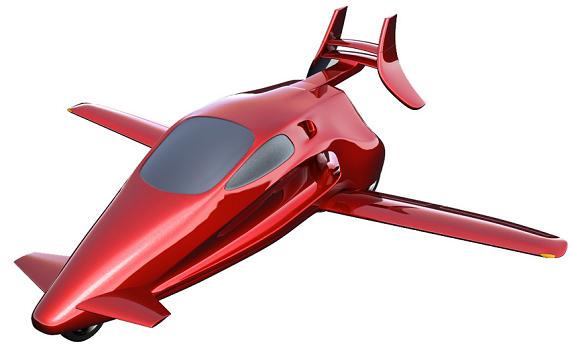 The "Switchblade sky bike" from US firm Samson Motorworks was on show in mockup form at the Oshkosh AirVenture show last week. Flight International quotes Samson founder Sam Bousfield as saying that he expects Switchblades - which will be sold in kit form - to cost owners approximately $80,000 in total. Some $60k of that would be for the kit, and the remainder for an engine and avionics of the purchaser's choice.

The Switchblade is essentially a streamlined three-wheeler with two side-by-side seats, perhaps more reminiscent of a flying Reliant Robin than an aerial motorbike to British readers (though classified as a cycle for road-safety purposes). It will be able to run on the ground at "90+" mph according to Samson, and there is "room for golf clubs" in the cabin.

In order to get airborne, the Switchblade pops out two "scissors" wings from a clamshell belly case which keeps them "protected from road grunge and rock dings". The rear-mounted ducted fan can then propel the machine into the air to cruise at an estimated 134 mph, though this is expected to worsen the fuel economy from 60 mpg on the road to 22 mpg airborne. Samson recommend a 120 horsepower "Freedom Motor" low-emissions powerplant capable of burning a wide variety of fuels, but offer customers the option to fit any suitable engine of their choice.

Standard features are expected to include air conditioning, a digital "glass cockpit" able to switch easily between road and flight mode, a stereo system and "automatic vehicle leaning in turns" - not to mention a leather interior and parachute emergency-landing system. The Switchblade is also expected to qualify for a Californian Ultra Low Emissions Vehicle rating.

The expected specs seem very impressive indeed, particularly when compared to the Terrafugia Transition, a not dissimilar "roadable aircraft" which has already flown. Samson's Switchblade is expected to offer the same payload as a Transition and similar airborne range. It will apparently boast much better air and ground speed than the Terrafugia design, lower emissions and better protection for stowed wings. The ducted fan suggests that it would be significantly quieter, too. And on top of all this, Samson believe they'll be able to fit such luxuries as air conditioning, which Terrafugia's MIT-trained engineers had to sacrifice so as to save weight.

A clue as to how the Switchblade's possible superior performance might be achieved, indeed, can be found in the fact that despite notionally being a "motorcycle" rather than a "car" it will actually weigh 1400lb all up. The four-wheeler Transition, by contrast, is intended to fit within the FAA 1320lb weight limit for "light sport" aircraft, and uses a less powerful engine too. A light-sport pilot's licence is easier to achieve and keep up than a normal private-pilot ticket, which will presumably be required for Switchblade users.

All in all a very ambitious design, then. It might fly next year, but it seems fair to say that the aerial Reliant Robin won't be road-legal and airworthiness-certified for a long time if at all. For now, Samson aren't even taking reservation deposits and the firm doesn't yet have an estimated delivery date. ®