Updated Twitter was knocked offline on Thursday after the site became the victim of a distributed denial of service attack.

Users of the micro-blogging service are used to seeing the fail whale, a graphic that appears when service is over capacity, but this time around the site was left completely unreachable from around 1500 on Thursday (UK time) for around 90 minutes.

A terse messages on Twitter's status blog initially said the site was down before adding "We are defending against a denial-of-service attack, and will update status again shortly". 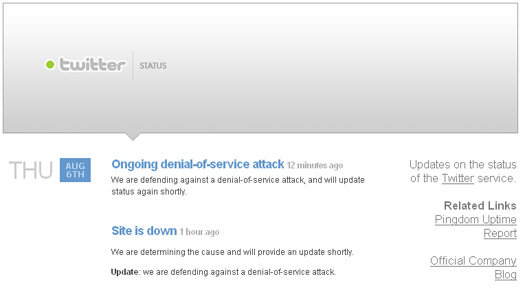 While there's no indication who might be behind the attack, Twitter has a few declared enemies. It has earned the ire of malware makers after turning on filtering technology to stop them exploiting its users.

More ominously it was cited as a key element in recent anti-government unrest in both Iran and China.

Graham Cluley, a security consultant at Sophos, initially said the hallmarks of the outage were not those of a planned downtime.

"Something has clearly gone wrong," he said. "It could be human error or some other cause. We have nothing to indicate that the outage is caused by a security problem at this point."

The outage has at least one positive effect. "All those Twitter addicts will be doing something more useful instead," Cluley quipped. ®

Twitter returned towards the land of the living at around 1645 (UK time). The website remains difficult to reach while the attack is continuing, however some messages are getting through. The motives (much less the perpetrators) behind the assault remain unclear.