An unusual object recently found on Mars by a NASA robot - said to be "the size of a large watermelon" and to weigh a "half ton or more" - is thought by boffins to provide proof that the Red Planet once had a much denser atmosphere than it does now. 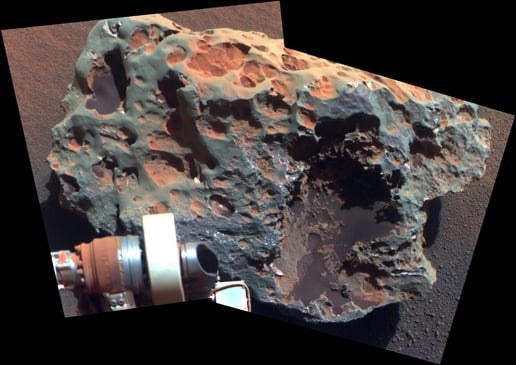 Robot rovers and Martian meteorites: the new rock and roll

The so-called "cobble" or boulder, named "Block Island" by NASA robo-rover operators, was spotted last month as the solar-powered droid crawler Opportunity slowly trundled past its resting place on the Meridiani Planum on Mars. Excited boffins immediately assessed the boulder as possibly being of alien origin, not from the red planet at all, and redirected the robot explorer to take a closer look.

This has now been done, and the space-boulder community is abuzz with the news that, indeed, "Block Island" - like its robotic examiner - fell from the skies to the Martian surface. However, for a meteorite of such a size and composition to land intact, it would have to have fallen through a very different atmosphere to that which now encloses the fourth planet.

"Consideration of existing model results indicates a meteorite this size requires a thicker atmosphere," said rover boffin Matt Golombek of NASA's Jet Propulsion Laboratory in California. "Either Mars has hidden reserves of carbon-dioxide ice that can supply large amounts of carbon-dioxide gas into the atmosphere during warm periods of more recent climate cycles, or Block Island fell billions of years ago."

Had Block Island fallen from the Martian skies into today's thin atmosphere, it would have hit the surface at such speed as to be melted, vaporised and/or smashed to bits. Thus, the boffins theorise, it must have fallen through a much thicker gaseous envelope, more on the order of Earth's. Mars has been theorised to have had such an atmosphere aeons in the past, when the red planet was potentially home to life - probably now long extinct.

According to the space agency, Block Island is of nickel/iron composition. NASA adds:

Spectrometer observations have already identified variations in the composition of Block Island at different points on the rock's surface. The differences could result from interaction of the rock with the Martian environment, where the metal becomes more rusted from weathering with longer exposures to water vapor or liquid.

Having sucked Block Island dry, so to speak, Opportunity will presently resume its journey from Victoria Crater, where it landed, to the larger Endeavour Crater. On previous form the slow-moving machine will reach this goal in about four years. The robot rover was originally expected to last no more than three months on Mars but has now been running successfully for more than five years, so it may well get there.

Meanwhile Opportunity's companion rover, Spirit, remains bogged in a sand trap on the other side of the planet. NASA boffins, using test results obtained using an Earthbound trial rover and sandpit, are trying to work out a way of freeing it. ®