How to hack a Sony Reader

Inside the Linux-based e-book viewer

When you plug your Reader in over USB, you don’t see much in the way of control files. There’s a /tmp folder, a folder for Digital Editions, and a database folder, below which you’ll find the various media – images, music and e-books that are on the Reader – and a few XML files related to them. 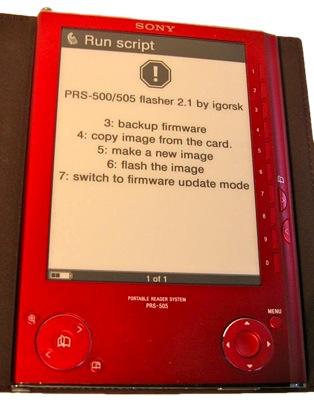 What you won’t see are any of the files that control how the Reader behaves. For that, you need Universal Flasher, which is available from the MobileRead forums. Unzip it, and you’ll have a collection of files that’s designed to be copied onto an SD card, together with an autorun.xml that allows you to flash your Reader with updated firmware.

For the most basic customisations – such as controlling different button functions – that firmware incorporates more XML files. For example, the current UK firmware for the PRS-505 is version 1.2.00.18050. The Universal Flasher kit includes a directories for each model and firmware supported, called files.{model}.{firmware}. Within that, the /opt/sony/ebook/application/resources folder contains a file called applicationStart.xml and another folder, /scripts, which contains main.xml. It’s in these two files that the bulk of customisation for the reader is done. You can also replace some of the image files for the reader, by placing them in the scripts folder, changing the icon set, for example.

When you insert an SD card containing all the files from the flasher kit into the Reader, you’ll be presented with a menu that allows you to flash a new firmware, or make a copy of the existing one.

So, customising button functions is a matter of editing the applicationStart.xml or main.xml files in the folder for your Reader’s version of firmware, copying the whole lot to an SD card, plugging it in and picking the right option from the menu.

As well as the Flasher itself, download the originals.zip file, which contains the unmodified scripts and images from the reader. Icon customisations are perhaps one of the easiest: the file kBookIcon.png contains most of the icons used in navigating round the Reader, while kBookAssets.png contains the ‘Reader’ logo and some other symbols.