Collar the lot of us! The biometric delusion

Optimism beats evidence in the drive to fingerprint the world

Special report Until the 16th century, educated opinion, as codified by Ptolemy, held that the Earth is at the centre of the universe. Then along came Copernicus.

On 29 June 2009, the Identity & Passport Service (IPS) published their latest paper on the National Identity Service (NIS). According to Safeguarding Identity (pdf), "the vision for the NIS is that it will become an essential part of everyday life, underpinning interactions and transactions between individuals, public services and businesses and supporting people to protect their identity" (para.3.32). 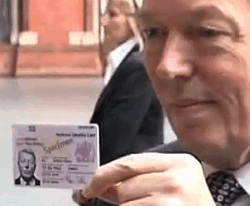 Placing the NIS at the centre of social interaction like this makes IPS about 92 million miles wide of the mark.

How is the NIS supposed to achieve IPS's vainglorious objective? “Our intention is that, at the core of the information used to prove identity will be biometrics, such as photographs and fingerprints” (para.3.6).

It follows that, in the eyes of IPS, the NIS stands or falls on the reliability of the biometrics chosen. If they don’t work, the NIS can’t work.

When he was Home Secretary, David Blunkett told us that biometrics "will make identity theft and multiple identity impossible. Not nearly impossible. Impossible". That is the commonly held view.

It may be the commonly held view, but is it correct?

Not everyone agrees. Dr Tony Mansfield and Mr Marek Rejman-Greene, for example, opened their February 2003 report to the Home Office by saying the exact opposite: “Biometric methods do not offer 100% certainty of authentication of individuals” (para.4).

Tony Mansfield specialises in biometric device testing at the National Physical Laboratory and Marek Rejman-Greene is the Senior Biometrics Advisor at the Home Office Scientific Development Branch (HOSDB). Who is right? Those two individuals? Or David Blunkett and all the politicians and civil servants and journalists in the UK and abroad who agree with him?

For Copernicans, the answer depends on the evidence.

There follows a review of the biometrics evidence that has come to light over the past six years.

Identification is the job of proving that each person has one and only one entry on the population register. Professor John Daugman, the father of biometrics based on the iris, demonstrates easily that that job is not feasible for large populations.