From Easy Rider to Smart Chopper

Leccy Tech A group of tattooed and portly custom Chopper builders from New York State and a straight-laced electronics firm make for an odd pair. But they are the duo behind Smart Chopper - an extreme leccy bike. 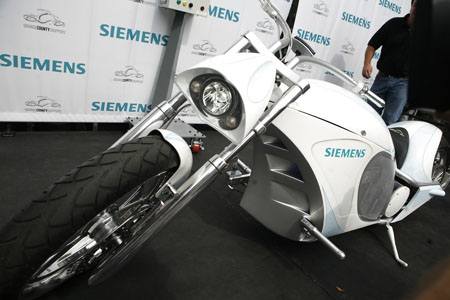 The bike’s development also helps remind the world that Siemens still has its finger on the environmental pulse, of course.

It takes five hours to fully charge the bike’s battery using a 110V outlet. There’s no word yet on battery capacity, but those figures hint at something in the region of 8kWh.

A single-speed clutchless transmission drives power from the bike’s motor to the macadam, Siemens added.

Smart Chopper screams OCC styling - with swooping lines, a 120in wheelbase, a 10.5in-wide rear tyre and front forks raked at a 45° angle. 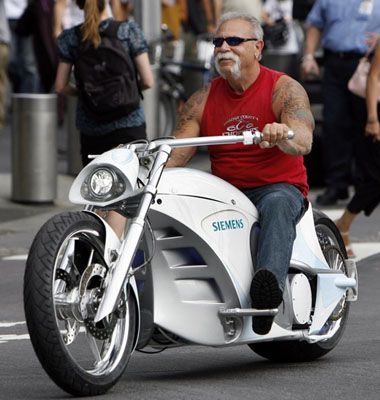 The bike will be sold off for charity next year

In true rocker/biker style, Smart Chopper will spend the next 12 months on a promotional tour of North America. It will then be auctioned off, with the proceeds going to charity.

The successful bidder will secure themselves a truly unique machine, as neither Siemens nor OCC have any plans to manufacture the bike on a commercial scale.

It’s also worth tuning yourself into the next series of American Chopper – due to air in October – because Smart Chopper’s development will be featured in the programme. ®