Leccy Tech The truly wretched East German Trabant looks set to make a comeback at next month’s Frankfurt Motor Show. But, unlike the fume-belching 1950s-era model, the updated Trabant will run on electricity and sunshine.

Set to be called the Trabant nT, the redesign is the idea of German die-cast toy manufacturer Herpa Miniaturmodelle, which has produced a prototype of the car to help generate enough interest and investment for a production launch in 2012. 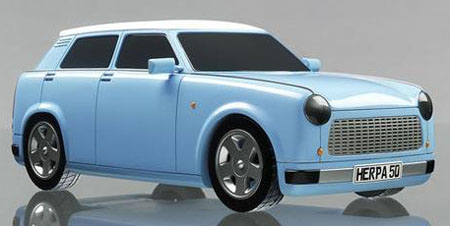 The e-Trabant will apparently be capable of 75mph, with a rooftop solar panel to help keep the car’s battery topped up. Weighing in at less than 1000kg (2200lbs), the car will have a range of 250km (156 miles) and an electric drive train supplied by Berlin-based IAV Automotive Engineering.

Herpa – which bought the Trabant copyright in 2007 - is based in Saxony, Germany, the same location as the original Trabant factory. Herpa has also paid homage to the original Trabi by retaining many of its design aspects, including the broad C-pillars and circular headlights.

And the firm hasn’t done a bad job, when you consider the original motoring monstrosity that Herpa had to work with.

During the 30 years that the original Trabant was in production, around 3m of the cars were produced.

Herpa hasn’t said what its sales expectations for the Trabant nT are, but we’re guessing the redesign won’t demand the same ten-year waiting list that the original did. ®