Asus laptops were the most reliable notebook computers during Q2, US repair specialist has claimed. Apple came second, Lenovo third. 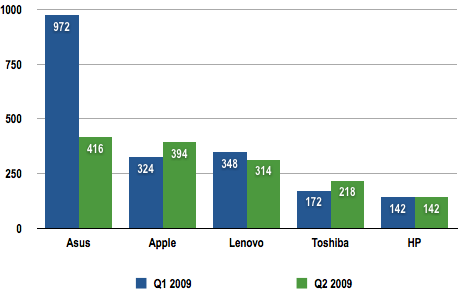 Rescuecom's numbers are derived from the number of support and repair calls it receives - some 11,560 in all across the quarter, a reasonable statistical sample size even if well below the number of personal computers shipped in the US in the same period.

Asus did rather less well than it did in the previous quarter, but its Q1 score was due to exceptionally small number of Asus owners among Rescuecom's customer base. That figure has increased, yielding a rating more directly comparable to other scores.

The higher the reliability score, the less likely it is that a machine bought from a given brand will need repair. ®