For the past five months, a website for investment services giant Ameriprise Financial contained bugs that allowed even low-level criminals to inject malicious content into official company webpages and steal user's cookies, according to a web security expert.

The XSS, or cross-site scripting, flaws made it possible for phishers to send Ameriprise customers bona fide links to the Ameriprise website that opened pages that intermingled counterfeit content with legitimate text and graphics. The holes could also allow criminals to steal browser cookies used to authenticate online accounts.

In the five months since Russ McRee of HolisticInfoSec.org first identified the bugs, Ameriprise offered customers statements like this one, which assures visitors that "no one without the proper web browser configuration can view or modify information contained on our systems." And yet, not one of the half-dozen warnings McRee sent was answered.

"The reality is that not enough of these companies at that level, particularly in the financial sector, properly do intake for vulnerabilities," said McRee. "There should be something on their site that says 'If you see a security issue on our site, please report it.'"

It was only earlier this week that federal prosecutors revealed that another garden-variety web vulnerability, known as an SQL injection, was the chink that allowed Albert Gonzalez and other hackers the toehold they needed to steal more than 130 million credit card numbers from card processor Heartland Payment Systems and four other companies. Like SQL injection flaws, XSS vulnerabilities have been around for more than a decade and are routinely discounted as insignificant by many of the websites plagued by the bugs.

Indeed, Benjamin Pratt, Ameriprise’s vice president of public communications, played down the severity of the bugs brought to his attention, saying they affected only one portion of the company's site.

"It's an important point to note that none of our client data can be exposed by this," he said shortly after being alerted to the bug. "There's no one at risk here. Like any other vulnerability, we're aware of it and we're moving as quickly as we can to repair it."

He said Ameriprise officials have no way of verifying that the bugs were reported as long ago as March, but in any event he said that there are no plans to review any of the mechanisms the company may have in place to receive notifications from the public about website vulnerabilities.

"There are plenty of customer service and other phone numbers available on our website," he said. "I can't speak to that specific experience."

It's not the first time a major financial services company has been caught sitting on a bug that could undermine the security of its online customers. In December, web application developers fixed several XSS holes on the website of American Express, more than two and a half weeks after McRee reported them to company representatives.

That bug was particularly embarrassing because Amex is a founding member of the PCI Security Standards Council, the group that sets the rules governing the Payment Card Industry. According to the rules, sites that suffer from XSS vulnerabilities are not compliant with payment card industry data-security standards.

McRee provided three examples of the types of links. One of them looked like this:

It caused browsers hitting the Ameriprise website to receive a popup window that prompted them to download an executable file. 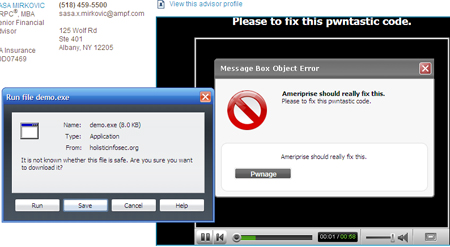 Both Internet Explorer version 8 and Firefox running the NoScript add-on were immune to the attacks, thanks to built-in safety mechanisms.

Such web-application flaws are often easy to fix because they require only a line or two of code to be changed. Sure enough, Ameriprise repaired its site less than two hours after The Register notified company representatives of the vulnerabilities. ®