No more Eurofighters for RAF, despite 232-jet pact

A senior RAF officer has stated unequivocally that the British government considers itself under no obligation to buy any more Eurofighter/Typhoon jet fighters. The statement would seem to confirm that no more will in fact be bought: but the taxpayer may yet spend billions more on upgrading the existing RAF fleet. 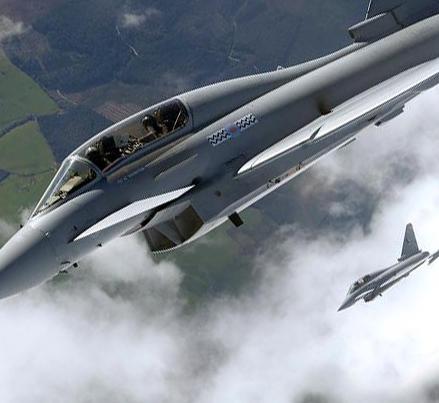 Final pricetag still to be confirmed.

Flight International reports this week on remarks by Air Commodore Chris Bushell, leader of the Ministry of Defence (MoD) project team in charge of the fighter.

"In procuring these 40 Tranche 3 aircraft the UK will have met its commitment," said the air commodore. "We will have fulfilled our obligation, but retain the option to purchase more aircraft downstream should we wish to."

The UK was generally believed to be committed to the purchase of 232 aircraft, as a result of negotiations in the 1990s between the partner nations producing the plane - Britain, Germany, Spain and Italy. The amount of work done in each country was dependent on the number of orders to be placed, meaning that the UK's large order was very lucrative for BAE Systems plc.

However since the international agreement was inked it has long since become apparent that the RAF cannot use 232 aircraft, and that if so many were delivered large numbers would sit in mothballs, perhaps never seeing use. This previously occurred in the 1990s with the equally-controversial Tornado F3 fighter - also a BAE product - now being replaced by the Eurofighter.

It was thought that any attempt to renege on the 232-jet promise by Blighty would lead to stinging financial penalties under the original agreement, but it would appear that the plane's lamentable history of cost overruns has given Whitehall a bailout option.

Air Commodore Bushell says that each nation's total financial liability under the pact was "capped by a pre-defined cost ceiling, taking into account the amounts already spent". The programme's severe cost increases having taken the UK buy past the red line with just 40 Tranche 3 planes rather than 88, the MoD is freed from its obligation.

The UK will now receive 184 jets, 24 of which are to be sold on to Saudi Arabia, leaving the British inventory at 160. This is still more than the realistic RAF requirement - the most the service could realistically field would be 7 frontline squadrons and a somewhat bigger training unit, and indeed the final roster may well be less. That would equate to a requirement of around 140 jets, including spares to allow for crashes or (unlikely) combat losses.

However it's thought that Britain is seeking to sell on more Eurofighters to other customers - perhaps Oman. It has been agreed among the partner nations that such sales are OK, even though this is liable to cut into the Eurofighter's export sales prospects.

It would appear then that the MoD may manage to wind up with a suitable number of jets for its air force, rather than paying billions more for surplus aircraft. No money has really been saved for the taxpayer here as such, however, as it is only the massive cost overruns to date that have let the UK off the hook.

Meanwhile the partner nations are now plunged into a mammoth new set of negotiations regarding upgrades to the costly jet. It was designed as a pure air-to-air fighter, but such combat is very rare and airforce chiefs would like to make the plane more relevant. Some RAF examples have already been adapted to drop smartbombs, but this is seen as a limited ground-attack capability.

The RAF makes no secret of its desire to fit the Eurofighter out with homing anti-tank weapons and standoff cruise missiles, allowing it to attack enemy armoured formations on the move, and targets protected by tough air defences.

The plane is also a trifle behind the times on its primary role of air superiority, having taken so long to arrive. There's no chance of making it into a US-style stealth fighter, but some of the partner nation air forces (including the RAF) aspire to fit it with the new super-long-range "Meteor" ramjet air-to-air missile, and perhaps with a trendy new electronically-scanned radar.

There's scope for the Eurofighter to cost billions more in acquisition costs yet. ®