'Skanks in NYC' catfight hots up

The woman behind the "Skanks in NYC" blog dedicated to putting the boot into model Liskula Cohen is suing Google for $15m after the search monolith bowed to court pressure to reveal her identity.

Port subsequently laid into Cohen on her now-defunct Blogger.com presence, calling the clotheshorse a "psychotic, lying, whoring, still going to clubs at her age, skank", and crafting unflattering captions for snaps of the catwalk-stalking Canadian: 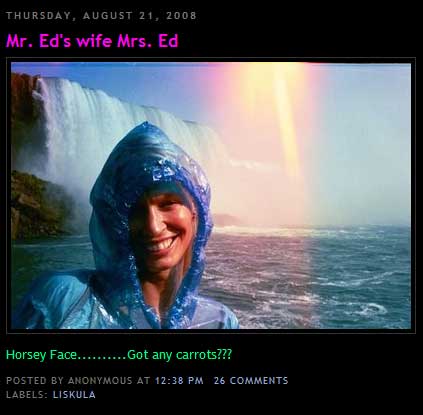 Cohen responded by filing a defamation suit in Manhattan Supreme Court, in the hope of finding out who was behind the outrage. The court obliged, rejecting Port's defence that blogs "serve as a modern-day forum for conveying personal opinions, including invective and ranting", and therefore shouldn't be regarded as fact.

Google duly obeyed the court's direction to unmask Port, and now finds itself the target of further litigation from the rather indignant net bitchslapper.

According to the New York Daily News, Port reckons the whole sorry affair is Cohen's fault. She said: "By going to the press, she defamed herself. Before her suit, there were probably two hits on my website: One from me looking at it, and one from her looking at it.

"That was before it became a spectacle. I feel my right to privacy has been violated."

Regarding just why Google should cough, Port elaborated: "When I was being defended by attorneys for Google, I thought my right to privacy was being protected.

"But that right fell through the cracks. Without any warning, I was put on a silver platter for the press to attack me. I would think that a multi-billion dollar conglomerate would protect the rights of all its users."

Enter stage left "high-powered" attorney Salvatore Strazzullo, who's prepared to claim that Google has "breached its fiduciary duty to protect her expectation of anonymity".

He declared: "I'm ready to take this all the way to the Supreme Court. Our Founding Fathers wrote 'The Federalist Papers' under pseudonyms. Inherent in the First Amendment is the right to speak anonymously. Shouldn't that right extend to the new public square of the internet?"

Doubtless many of you are keen to see photographic evidence of how Cohen and Port measure up. Obligingly, the New York Daily News has fetching snaps of the opposing forces right here. ®