'Surgical jamming' bubble follows you to the corner

US military researchers are looking to build networks of small, low-power transmitter boxes which together can perform "surgical jamming" of digital signals - shutting down cellphones and sat nav receivers within an area "on the order of a city block corner". 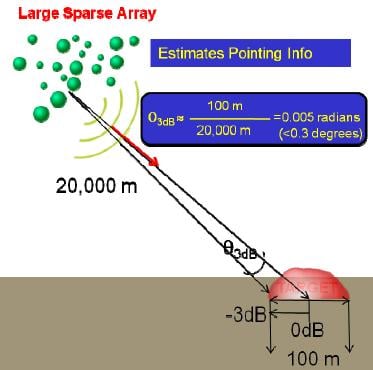 Watch out for the green bubbles

The new initiative is called Precision Electronic Warfare (PREW). It comes, of course, from our old friends at DARPA, where it's their goal to give every double-edged sword a bleeding edge.

Each PREW node would be equipped with a highly-accurate clock synchronised with those aboard its fellows, perhaps one of the tiny ones developed for the Chip-Scale Atomic Clocks programme, and would probably be able to communicate with them as well. It would also have "localisation" - ie a good idea of its location, presumably from GPS sat nav or some similar tech.

All these would merely be enabling accessories, however, allowing the PREW radio-cloud to use its "energy transmission" capabilities with unusual precision. The 40-plus nodes would be able to point and focus their jamming power on an area perhaps 100m across - as DARPA says, a street corner - from as far as 20km without affecting reception in adjacent areas.

Exactly what frequencies the PREW should be able to target is a secret, but DARPA offer a broad hint by saying that "target signals were chosen as representative of a range of signal classes, to include navigation, digital infrastructure-based communications, and digital non-infrastructure communications". Or in other words GPS sat nav, cellphone and CB-type radio bands.

And there's another handy wrinkle:

For point-to-a-spot the general belief is that a closed-loop beacon approach will be needed to achieve the required accuracy. The proposed system can utilize beacons that are within the node constellation, near the target area, or within the target area. The beacon device can be a cooperative participant in the system or a device that is unaware that it is being used as a beacon.

In other words, the system would be able to lock onto your cellphone and hold you within a bubble of jamming no matter how you moved about, denying you any communications or navigation services. If you weren't carrying a suitable marker beacon, one could be planted on you. Presumably in time DARPA will also be able to make the street lights switch off as you pass, then switch on again once you move on.

Another application could see a bubble of sat nav denial wrapped around an enemy missile or autonomous vehicle, without affecting nearby US units; or a given cell tower suddenly blotted out; or you name it.

Interesting stuff, with the usual caveat that not many DARPA projects ever succeed. There's more from the federal warboffins here (pdf). ®