Various security shortcomings on the main nhs.uk website established a means for dodgy sorts to present content of their choosing in the context of the NHS site. The flaws were discovered by Phillip Clarke, a director at a small UK-based software development firm, who began looking into the issue after reading about recent cross-site scripting flaws on the websites of MI5 and the MoD.

Clarke also found similar XSS flaws on the website of the National Institute for Health and Clinical Excellence in the UK (NICE), the organisation that publishes clinical appraisals of medical treatments. 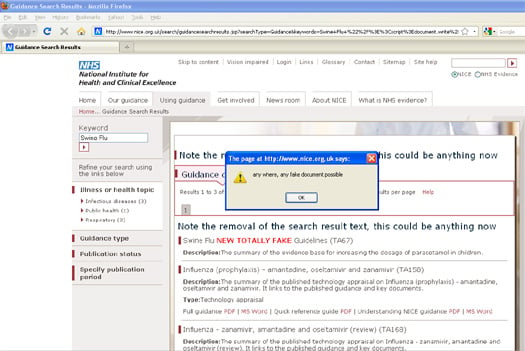 Normally XSS flaws, particularly on financial services websites, create a means to launch phishing attacks. In the case of the flaws on the health service websites the implications are even more serious, because they created a mechanism for spreading disinformation about medical emergencies.

"With one mass email [a miscreant] could inform the British public about 'new swine flu guidelines' and do something like tell every patient to ignore the instructions on the bottles of paracetamol and give twice the dosage," Clarke explained, adding that a link inside such an email could be constructed such that it appears to point to advice on the NHS website.

The flaws on both the NHS and NICE website have been cleared up but their appearance in the first place raises serious questions, not least because Clarke had to work with great persistence and diligence for almost a fortnight to get in touch with the relevant people who would listen to his concerns and resolve the problems. In the process he contacted staff at NICE, the SANS Institute, UK CERT and the offices of politicians, among others. "There should be an easy way to contact the website team," Clarke told El Reg.

Frustrated by a lack of progress after sending out numerous emails, Clarke published an advisory on the sla.ckers.org hackers forum here. Clarke was particularly concerned about the issues as his wife is a doctor.

Clarke was eventually directed towards someone at GovCertUK, who helped resolve the problems in co-operation with the NHS's mysterious webmasters. Clarke's requests to contact the webmasters directly were politely refused. Our queries about why the process was so complicated were similarly courteously rebuffed.

GovCertUK (as part of GCHQ) provides an emergency response capability to public sector organisations that may require technical support. Since GovCertUK became aware of this incident it has been working with the relevant teams in the Department of Health and the NHS to remedy the highlighted issues.

A spokesman for Connected for Health said that the reports of the problems with the NHS site were dealt with on the same day they were received. This response ignores Clarke's strained efforts over two weeks just to get in contact with the right person. Wouldn't it be a good idea to have a "report site problems" or contact the webmaster feature, we asked.

We also asked about how the NHS plans to prevent a repetition of this type of problem in future. The spokesman said that technicians monitor the website for any changes and respond quickly when problems arise.

Surely the NHS's website security policy is more proactive than that, once you get into the detail, which hard pressed PR people might not have straight to hand. We asked for a more substantive response and will update this story once it become available.

Prior to the resolution of the security flaws there were a handful of issues with various pages on NICE's website and two distinct flaws on the main NHS website.

Firstly the section of the website used to personalise the experience didn't filter URLs, a shortcoming that made it possible to draw in script from a third party website. Secondly the 'send a link to a friend' section of the site allowed tainted links to be passed along in mails sent via the NHS site.

Clarke forwarded El Reg a spoofed email in order to validate this concern. He explained that an email from the NHS domain sent to a third party could be rigged to log into an arbitrary website.

He blamed the flaw, now fixed, on a lack of outward-bound filtering. The flaw is unrelated to problems in sending email to people working in the NHS that cropped up earlier this week.

According to XSSed, an archive website that records incidents of cross-site scripting bugs on websites, the latest website security shortcomings of the health service are far from isolated. XSSed records 20 incidents of similar problems on various NHS websites, the earliest of which dates from February 2007. ®

Nothing fills you with confidence in an IT contractor more than hearing its staff personal records were stolen by ransomware hackers. Right, Cognizant?