One step closer to astromech droids?

Scientists in Japan have built a computer capable of generating holographic images from three-dimensional models composed of up to a million points.

But don't expect holographic messages from alluring princesses any time soon: the machine can only render million-point holograms at a single frame every second.

Drop the complexity of the image to 100,000 points and the frame rate rises to 10f/s, "near video rate", the team from the Tokyo University of Technology, Chiba University and the Kisarazu National College of Technology said in a paper published by the Optical Society of America. 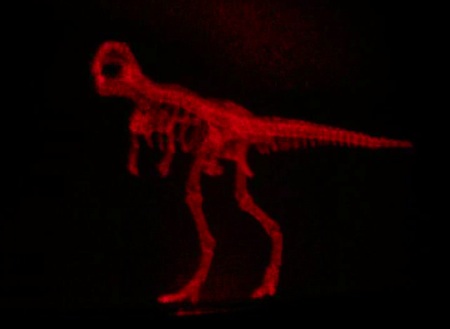 The system pumps out images with a resolution of 1920 x 1080 - full HD, in other words. The image is dislayed as an interference pattern on a reflective LCD. Laser light is passed through a beam splitter to send half the light on to a viewing lens and the rest to the LCD. The light reflecting off the LCD interacts with the first split beam to generate the hologram.

Calculated and render successive interference patterns and the hologram becomes an animated one.

Creating the interference pattern on the LCD requires some hefty processing power. The team developed a board for the task, called Horn 6, and the rendering system contains 16 of these. Each Horn 6 contains four off-the-shelf Xilinx Field-Programmable Gate Array (FPGA) chips for image calculation. 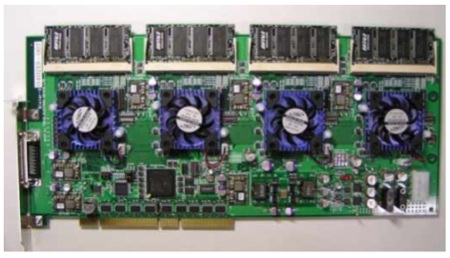 The Horn 6 processing board

The 16 cards are fitted four at a time in four PCs linked on a Gigabit Ethernet network. A fifth PC, also networked, manages the whole operation.

The team said the next step in their research programme will be to up the system's processing power to allow them to run real-time million-point hologram animations. They also hope to be able to incorporate calculations to hide parts of the object that should be occluded by foreground elements. 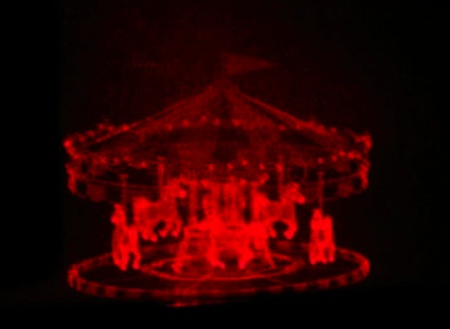 You can download the full paper (PDF) from the Optical Society of Amerca here. ®