Tossable bots for US Navy SEALs

The shortlived era of the throwable "camera grenade" may already be over, as beercan-sized, hurlable robots with infrared nightsight video are now being delivered to US troops. Tellingly, elite special-operations units have also decided to try the new kit out. 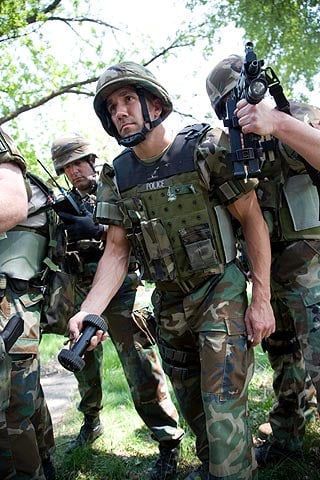 The gear in question is the "Recon Scout" minidroid from American firm Recon Robotics. The machine has an infrared see-in-the dark video system and can drive itself about very quietly on command from a remote human operator.

So far, so boring. The Recon Scout's special sauce is that it's just 3 x 7 inches, about the size of a beer can - or only a bit bigger than a grenade. And it's apparently tough enough to be thrown through a door or window, dropped down a chimney etc before being driven about to see what it can see.

US troops of the 5th Stryker Brigade Combat Team now deploying to southern Afghanistan already have "Dragon's Egg" flingable weeble-ball cameras for similar purposes. These can't move about once thrown, but do offer a 360° view.

Another choice in this area is the Dragon Runner droid from Qinetiq, with a lot more bells and whistles than the Recon Scout, but this is 16 inches long and weighs 14 pounds. Dragon Runner was developed from a US Marines requirement called "Throwbot", but it's more like hammer-throwing than cricket (or presumably one should say rounders, in this American context).

The recon Scout, by contrast, weighs just over a pound - about the same as a biggish can of beer. It would seem potentially a good bit more desirable than the Dragon's Egg or similar chuckable-camera units, and a lot more portable than a Dragon Runner. The controller unit is also pleasingly handy, just walkie-talkie sized.

Recon Scout's not particularly cheap, though. The US Army ordered 150 of the little lob-bots in May for $1.35m, putting each one at a cool $9k - though this price should drop as more machines are ordered.

In another sign of possible military trendiness, the famous yet top-secret US Navy SEALs are also looking at the Recon Scout. Naval Special Warfare Group Two based at Little Creek, Virginia, ordered two droids and a control unit last week.

It would seem that the days of the immobile flingable spyeye may already be over before they've even really begun. Except in the British Ministry of Defence, of course, whose proposed "I-Ball" toss-cam shows no sign of moving beyond basic development work. ®