Frozen assets a waste of cash

Intel wants you to know that data centers are wasting energy - and money - by over-cooling their servers, burdened by warranties that may prevent them from aggressively raising their temperature.

That study included results from a recent Liebert survey of members of the Data Center Users Group (DCUG) that showed that each and every one of the respondents are cooling their data centers significantly more than needed.

The "than needed" figure is 27°C (80.6°F), as recommended by no less than the leading US cooling-industry consortium, the American Society of Heating, Refrigerating and Air-Conditioning Engineers (ASHRAE).

The ASHRAE recommendations were published last year in the consortium's "Environmental Guidelines for Datacom Equipment," which raised their 2004 high-end recommendation for inflow temperature from 25°C (77°F) to 27°C (80.6°F). 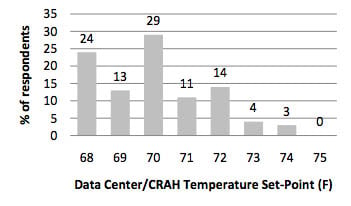 This info came up when Intel's Larson was discussing Advanced Cooling Environment (ACE) technology intended to provide a closed-loop monitoring and management system to allow servers to safely rise to that ASHRAE max. Doing so would save a tremendous amount of power.

As he explained it, "The [wasted] power comes from the fans in the CRAC units running overtime to push cool air into the system" - CRAC units being computer-room air-conditioning units, like CRAHs.

"If you can reduce how much the fan has to work by even a small percentage, you get a substantial improvment in power," he said, "and reducing the fan requirement by half reduces power consumption by something like 87 per cent."

Chilling the air, of course, also requires a significant power outlay, but getting the servers to tell the CRAC units exactly how much cooling they need and exactly when they need it isn't as straightforward as it might sound.

However, says Larson, "Working together with that industry to map a communication of those protocols can help us make a pretty dramatic reduction in power consumption by reducing the level of cooling required."

Of course, CRAC-unit vendors aren't motivated to step up and say that overly cool data centers are wasting power and money, seeing as how some of that money goes to them for more-powerful cooling systems.

But Larson is optimistic. "Believe it or not, we've been able to work with CRAC-unit vendors like Liebert and Emerson to look at how we can actually manage to get to a point of addressing reductions in power by managing temperature more effectively."

But when asked about a specific data center that has been rumored to be trying some aggressively higher inflow temperatures - up to even 100°F (38°C) - Larson said: "I don't think they're breaking our requirements yet because we have a warranty association with that."

When asked about Intel's policy when it comes to spreading the higher-temperature gospel, Larson said: "I'll be honest. We are pretty conservative about quality at Intel. We do get people who say, 'Hey, give me some relief on my ability to get warranty for your products when I run them really, really hot.' We haven't really done that. But we do know that we can meet the requirements of ASHRAE in this context."

So take a look at your warranties. Although Intel's Larson says that he doesn't see a wave of warranty renegotiation in the near future, he does suggest that ASHRAE's guidelines are sound.