Residents are suing the Long Island town of Hempstead for allowing the installation of cell phone antennae, on the basis that it's lowering the value of their properties.

The claim is not regarding the potential health risks, as has been the case before, but that the local authority has been negligent in preventing brown boxes being fitted to telegraph poles without allowing for the inevitable reduction in property values that would result.

"The Town of Hempstead has acted in an irresponsible manner, causing the value of a persons’ property to diminish," said legal representative Glenn Stephenson, "We are seeking for a day in court to prove that the Town of Hempstead, Metro PCS, and Next G Networks, violated the fifth and fourteenth amendments of the United States Constitution."

Stephenson added that they'd like $100m in damages, please, and an immediate cessation of any kind of wireless-infrastructure installation.

The boxes being installed by Next G, on behalf of Metro PCS, are pretty small - about 60cm high - and don't require planning permission, so there's no notification or opportunity for public discussion. 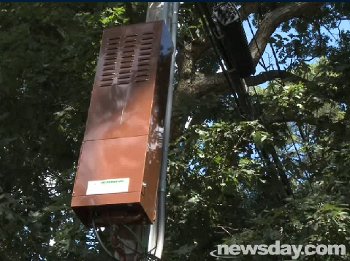 newsday.com has a good video showing the boxes too

The town of Hempstead isn't being drawn on the matter: it won't comment on ongoing litigation, but with 4G and upwards requiring more base stations, and base stations getting smaller all the time, it might not be long before you find a brown box suspended outside your own house. ®

Case to be filed in the Netherlands and London