Silent deathray in first blast from the skies 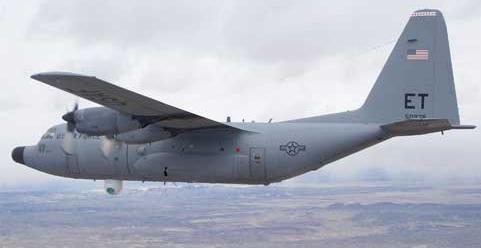 'ET'- ha! And they keep denying they have alien assistance!

"This milestone demonstrates that directed energy weapon systems will transform the battlespace and save lives," said Boeing exec Greg Hyslop. "The ATL team has earned a distinguished place in the history of weapon system development."

The ATL is much smaller than Boeing's headlining laser weapon, the jumbo-jet-mounted Airborne Laser (ABL), intended to blast enemy ICBMs as they soar upward from pad or silo. Rather the ATL is intended to pick off individual ground targets, somewhat in the fashion of existing Hercules-based side-firing AC-130 gunships. Indeed Boeing has referred to the ATL in the past as its "Laser Gunship".

ATL does resemble the ABL in some important respects, however. Like the bigger weapon, it is a chemically-fuelled laser rather than a solid-state electrically powered one, meaning that it can fire only a limited number of blasts before its sealed, six-ton laser module must be maintained and refuelled with hazardous toxic chemicals.

Just how many shots the ATL can fire before being rearmed is unclear, but hints dropped by Pentagon sources suggest it could be as few as six. This compares poorly with the firepower available aboard a normal AC-130, leading some analysts to wonder what the point of the ATL really is.

Boeing say that it will offer "ultra-precision" and "dramatically reduce collateral damage", though so far nothing of this sort has really been shown. A 40mm cannon aboard a normal AC-130 could "defeat" a stationary ground vehicle without damaging its surroundings: a .50-cal sniper rifle fired from a helicopter could do the same to a moving one.

It hasn't escaped notice, however, that neither of those things could strike silently - perhaps from so far off that the carrying aircraft wouldn't be noticed either - and without leaving any solid evidence of US military presence. Nor have observers failed to note that the US military agency in charge of ATL is the secretive Special Operations Command (SOCOM).

Boeing have evidently had some problems with the ATL - airborne test firings were expected last year, but this success didn't happen until last Sunday. However it would seem that the system may soon be as ready for frontline use as it will ever be, at least until electric lasers without fuel limitations are weaponised.

In years to come, the secret supertroopers of SOCOM may be able to cause a cell tower to stop working, a vehicle's fuel tank to suddenly explode, or a single person to inexplicably be incinerated - all completely silently and tracelessly, without anyone knowing they were ever there and not so much as a spent bullet left behind. ®