Oracle, which will presumably soon own Sun Microsystems, has not said much about its plans for the Sparc server business at Sun since announcing its takeover in April - but apparently the top brass at the company are going to assuage everyone's fears that Oracle will ditch Sun iron, and will do so on October 14 at the OpenWorld extravaganza hosted by Oracle.

According to this teaser pre-announcement, Oracle will be doing something that Sun hasn't done for eight years: showing off the performance of Sparc machines using the Transaction Processing Council's TPC-C benchmark, which is used to display the oomph of database servers.

"Oracle and Sun together are hard to match," Oracle says in the teaser. "Just ask IBM. Its fastest server now runs an impressive 6 million TPC-C transactions, but on October 14 at Oracle OpenWorld, we'll reveal the benchmark numbers that prove that even IBM DB2 running on IBM's fastest hardware can't match the speed and performance of Oracle Database on Sun systems. Check back on October 14 as we demonstrate Oracle's commitment to Sun hardware and Sun Sparc." 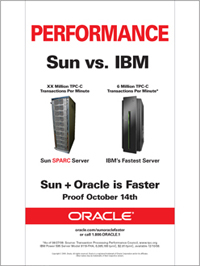 The teaser includes a mock-up of what will probably be an Oracle or Sun ad, depending on if the European Commission's antitrust authorities give the thumbs up on the acquisition so it can close. That ad shows the latest TPC-C results for IBM's Power 595 box, which can crank through a little more than 6 million transactions per minute (TPM) with 32 of the dual-core, four-threaded, 5 GHz Power6 chips and running IBM's AIX and DB2 stack.

The picture is intentionally grainy, but it looks like the performance that Sun will be bragging about will have three significant digits on the TPMs and maybe one decimal point.

Well, it seems unlikely that Oracle will use the occasion to show off how well Fujitsu's quad-core Sparc64-VII processors do on the TPC-C test in the 64-socket Sparc Enterprise M9000 servers, although had Sun and Fujitsu decided to show off the M9000 box, they could probably push as high as 8.5 million TPM and get some serious bragging rights.

So, Oracle is not going to talk about the M9000. But Oracle and a possibly still independent Sun probably will talk about an Oracle Database Machine cluster configuration based on Sun's top-end Sun Fire T5440 servers using its fastest 1.6 GHz "Victoria Falls" Sparc T2+ processors.

The Oracle Database Machine was announced at last year's OpenWorld event, and features x64 server nodes from Hewlett-Packard, Linux, clustering, and database software from Oracle, and InfiniBand clustering gear from Voltaire. Sun has its own InfiniBand switches and it could just run the TPC-C test on a "Constellation" x64 blade server and clustered storage setup and pretty much dial up as much scalability on the TPC-C benchmark as it wanted. But that would have nothing to do with Sparc, and Oracle has to keep chanting Sparc over and over again until it sells the business off.

It is hard to reckon how much TPC-C oomph the current T5440 servers might have. But when used as a database server for the TPC-C test and provided that it has enough storage bandwidth coming into the box, it is possible that a T5440 with four 1.6 GHz Sparc T2s (that's 32 cores and 256 threads) could hit 1.6 million TPM. (If the disk I/O isn't there, it could drop to 1 million TPM.)

Without cluster overhead, a rack of T5440s could have 16 million TPM of TPC-C oomph, provided the gillions of disks needed for the test could be pumped into it efficiently. With cluster overhead and lots of database partitioning tricks, two racks might be able to hit 25 million TPM. That is the scale that Oracle and Sun are going to need to show if the eight-core Power7 processors due next year can deliver four times the oomph as the current dual-core 5 GHz Power6 chips used in the top-end Power 595 boxes from IBM. ®