NASA software boffins have partnered with a Californian firm to work on a "personal rapid transit" system which would operate using a system of automated two- or three-person taxi-style "pods" travelling on overhead magnetic rail networks. 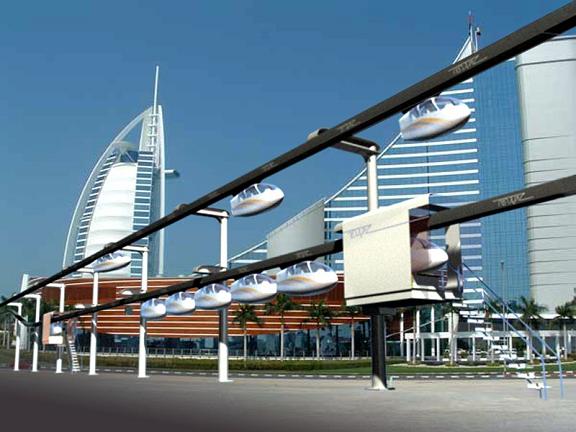 Someone's had a little accident in this pod, I'm getting in the next one

The so-called "SkyTran" system has been touted since the 1990s by engineer Douglas Malewicki, perhaps most famous as the inventor of Robosaurus - a 40-foot tall, 30-tonne firebreathing robot capable of crunching cars and planes in its mechanical jaws, popular at American monster truck shows and the like. Malewicki has also worked in the aerospace industry on the Apollo moonshot programme and the B-2 Stealth bomber among other things, and has also invented various jet packs, rocket bikes, submarines and so forth.

The idea of SkyTran is that lightweight "guideways" would be supported above roads and streets, either by ordinary metal utility poles or even brackets fixed to the sides of buildings. Every half-mile or so in the city there would be a SkyTran station/pod-rank with several streamlined electric vehicles lined up waiting.

A user would simply board the first pod, type in a destination and pay - probably using a smartcard system similar to London's Oyster card. The pod would move off, using a solid-state linear motor to lift its rooftop bogie off the guide rail and move itself along. After gathering speed on the siding guideway serving the stop, it would then move into the stream of pods flowing along the main lines of the network. Having dropped off its passenger(s) at their chosen stop, the pod could join the rank there or be sent elsewhere by the system as required.

Malewicki thinks the pods would be able to achieve 60 to 80 mph for short journeys on a city grid system, and up to 200mph on longer haul links across or between cities.

One problem for SkyTran is getting a city, airport or other local transit authority to take it seriously. Malewicki's colourful history probably hasn't helped here, and in fact the idea has now been farmed out to a company, Unimodal, which carefully makes no mention of him.

Another hurdle to be overcome is the necessary and highly complex control software which would be required by a large automated SkyTran network. That's where NASA comes in: boffins at the space agency's Ames research centre in California announced yesterday that they would team up with Unimodal to try out their Plan Execution Interchange Language (PLEXIL) and Universal Executive (UE) software on a SkyTran test setup.

“This collaborative effort is anticipated to help NASA with its aeronautics and space activities, while Unimodal gets to develop the next generation high-speed transportation system,” said NASA's Jeffery Smith. “NASA will receive valuable feedback from our systems software usage.” ®