Microsoft's Xbox 360 is the "least reliable" game console on the market, according to electronics warranty firm SquareTrade.

In the first two years of ownership, 23.7 per cent of Xbox 360 owners covered by a SquareTrade warranty have reported a fatal system error. By comparison, 10 per cent of Playstation 3 consoles broke down after two years and only 2.7 per cent for the Nintendo Wii in that period. 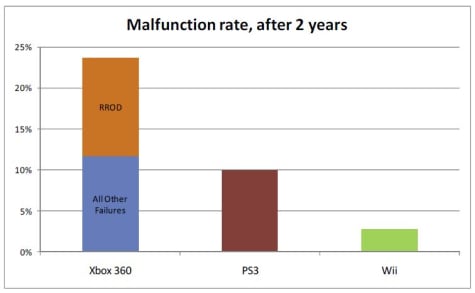 In the firm's analysis of 16,000 failed consoles in total, it found the Xbox 360's ubiquitous Red Ring of Death (RROD) failure accounts for about half of the system's malfunctions. Excluding RROD, Xbox failure rates drop to about 11.7 per cent – about level with the PS3.

Continuing to ignore RROD errors, the most frequent problem for the Xbox and PS3 were disc read errors. For the Wii, power issues were the most commonly reported problem. 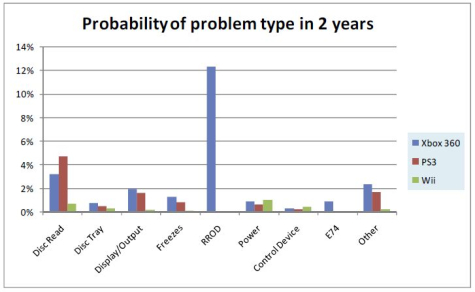 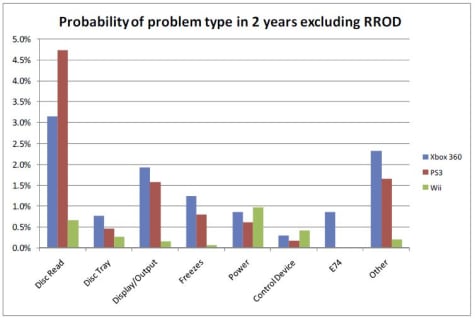 SquareTrade also found that while Xbox RROD failures were extremely prominent in 2008, they appear to have dropped significantly following Microsoft's introduction of the Jasper chipset late last year.

"It is still too early to definitively assert that Jasper has given RROD a knockout punch, but such an argument may be pronounceable in the coming months," it said.

But the warranter suspects the true impact of RROD may not be fully reflected in their data. It reckons Microsoft's well-publicized extended manufacturer warranty campaign as a result of massive RROD failures caused many customers to bypass SquareTrade and report their woes directly to Microsoft. The firm said it sent an email survey to its customers and found over half of those who experienced a RROD error went to Microsoft without contacting SquareTrade.

Other pollsters have found higher rates of 360 failures. A survey by gaming pub Game Informer in August consisting of 5,000 readers indicated an astounding 54.3 per cent failure rate in Xbox 360 consoles.

Another factor noted in SquareTrade's study was that Wii owners on average tend to spend less time playing the console. According to data gleaned from Nielson in April 2009, the average PS3 was played about 19.85 hours per month, the Xbox 17.5 hours per month, and the Wii 8.6 hours per month. But after applying the Nielson figures to its own study, SquareTrade determined the Xbox 360 still had the highest death rate with a 1.35 per cent chance of failure over 24 hours of use, compared to 0.50 per cent for the PS3 and 0.31 per cent for the Wii.

"Of the three major 7th generation game consoles, we can safely say that the Wii is the most reliable system on the market, with just one-fourth the malfunctions of the PS3 and Xbox 360," the firm concluded.

A copy of the report is available here. ®

(Graphage in this article courtesy SquareTrade)