NASA's Lunar Reconnaissance Orbiter (LRO) has snapped the Apollo 12 landing site where, on 14 November 1969, astronauts Alan Bean and Pete Conrad touched down to begin their 32-hour stay on the lunar surface: 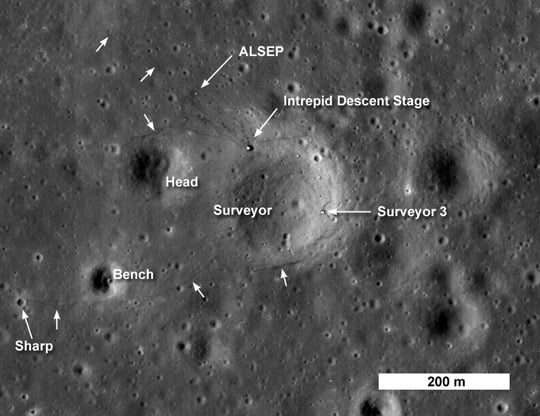 The Intrepid spacecraft touched down within 200 metres of the unmanned Surveyor 3 lander - launched two years earlier - at an "equatorial site on a flat lava plain" in western Oceanus Procellarum. NASA's caption to the picture explains: "The Intrepid lunar module descent stage, experiment package (ALSEP) and Surveyor 3 spacecraft are all visible. Astronaut footpaths are marked with unlabeled arrows. This image is 824 meters (about 900 yards) wide."

During two moonwalks, each of about four hours, Bean and Conrad deployed the aforementioned ALSEP and inspected the condition of the inactive Surveyor 3 (see pic below, featuring Alan Bean). They removed parts of the surveyor for return to Earth and "terrestrial analysis", which would yield "crucial data for present-day designers of lunar surface hardware". 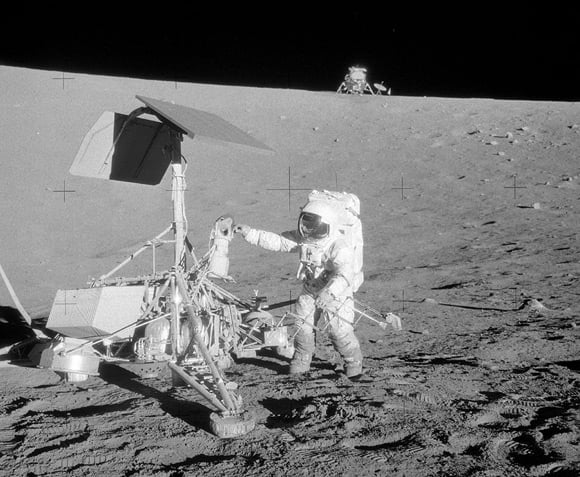 The pair also scooped up 32kg of lunar samples during their mission, described by NASA as an "incredible success".

NASA offers foodies, boffins $500,000 to find ways for astronauts to make their own dinners on the Moon, Mars