Microsoft is offering to bribe you into throwing a launch party for Windows 7.

Just as Redmond regains credibility after the debacle that was Windows Vista by garnering positive reviews for its upcoming Windows 7, its marketing geniuses have decided to embarrass the company by promoting bogus bashes in honor of that operating system's debut.

Although Microsoft has yet to officially announce these astroturf events, details can be found on the website of professional party organizer, House Party.

But you can't merely sign up for the party program. You need to get Microsoft's approval, invite at least 10 friends to your soirée, and agree to a lengthy set of Terms and Conditions. 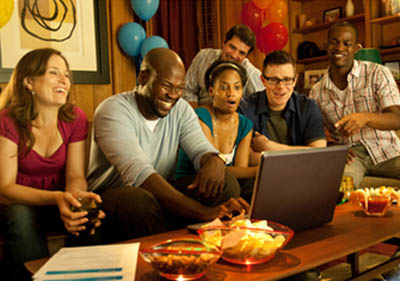 Experience the multi-culti bonhomie of an OS launch, right in your own home!

But oh, the merrymaking in which you'll partake should you be tapped to be one of the lucky hosts to throw a launch party between October 22 and 29. Party themes from which you can choose include "PhotoPalooza, Media Mania, Setting up with Ease, and Family Friendly Fun."

Ah, the mind reels at the sybaritic pleasures to be anticipated when roistering revelers rally 'round a laptop to set up with ease.

Microsoft wants the parties to occur worldwide, and so it's offering this once-in-a-lifetime opportunity to residents of Australia, Canada, France, Germany, Hong Kong, India, Italy, Japan, Mexico, Spain, and, of course, the UK, where you're offered "fun favours", and the US, where the same fun is to be found in the "favors" - or, in a nod to a large and growing stateside constituency, in "regalos divertidos".

We can only assume that the revelry will be unbridled, considering the thrilling items to be distributed to the assembled wassailers in Microsoft-provided Windows 7 Party Packs. In the US, for example, goodies include, according to House Party:

If you fail to make the cut, you can always look for Windows 7 totebags, puzzles, napkins, and playing cards on eBay October 30.

A drawing will also be held in which party hosts - as long as they're not Microsoft employees - can win a "mini-notebook laptop personal computer" [Note to author: please clear this quote with the Department of Redundancy Department. - Ed.] with a value of "at least seven hundred fifty dollars." The total number of prizes, we presume in keeping with the computer theme of the event, is 26.

All kidding aside, Microsoft's marketing brain trust has outdone themselves this time. There have been embarrassments before - who, for example, can forget Bruce ServicePack and the Vista Street Band? - but nothing can compete with the truly stupid idea of promoting ersatz parties filled with cheap, shallow "fun favo[u]rs" for the first product in years that might have had a genuine groundswell of sincere enthusiasm without marketing meddling.

Authentic enthusiasm has now been quashed. No self-respecting tech type with a lick of sense will risk being tarred with the fake-party brush.