Vista and Lotus: Knowing when to let go of a brand

Microsoft spent an absolute fortune on the Vista brand. In marketing terms, the Vista campaign was huge by any standards, and was a big success insofar as raising awareness of Microsoft's next-generation Windows offering was concerned.

Of course as we all know, things didn't work out too well for Microsoft. The the new features and functionality of Vista turned out not to be as game-changing as Microsoft had implied in its messaging. To make matters worse, the product wasn't really ready for mainstream use at the time it was launched. Initial expectations were therefore not met, leading to a significant backlash in the media, and ultimately among users. In the business context, many made the decision to defer upgrading because of the perceived risk and lack of incremental value, which is why XP is still the dominant version of Windows in corporate environments today.

The irony is that once Vista had settled down over the course of the first year or 18 months, it turned out to be a respectable operating system; certainly fit for purpose, and potentially offering some significant benefits, especially from an operations and risk management perspective in larger enterprises. But by then it was too late. Regardless of what was going on with the product, the Vista brand had accumulated too much negative baggage.

Painful though it must have been, we have to give Microsoft credit for realising this, pressing the big red reset button, writing off its investment, and starting again under the Windows 7 banner - a tactic that seems to have paid off.

There is a lesson here, perhaps, for another vendor that has accumulated significant brand baggage that is getting in the way of customers appreciating the potential of a couple of its product lines. Back in the 90s, IBM lost the battle for dominance in the email and calendaring server arena with Lotus Notes and the back-end Domino server that drives it. For reasons that don’t matter now, Microsoft stole the market from under its nose.

While IBM still argues the toss around market statistics - frequently trying to make the case that Lotus Notes/Domino is still as successful as Exchange - the following chart from our last Reg barometer study sums up the real situation. 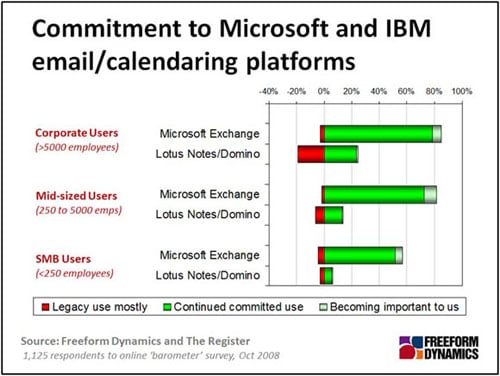 The data we are looking at here predominantly relates to respondents from the UK and USA. Based on this, IBM's footprint looks to be about half that of Microsoft in organisations with more than 5,000 employees, dropping proportionally as we look to smaller entities. Significantly, however, whereas the commitment and sentiment associated with Microsoft Exchange is overwhelmingly positive, Lotus Notes/Domino is much more likely to be regarded as legacy. This is particularly noticeable in the corporate sector where almost half of respondents using the IBM solution put it into the legacy category.