DSEi Some days, the world of military whizz-tech can get to be a bit humdrum. Awesome as missiles, robots etc. are, they can sometimes pall. But today is no such day: today we on the Reg military whizz-tech desk have been interviewing the inventor of an actual, working powered exoskeleton - in his suit, powered up, with hundreds of pounds of armour and other military bric-a-brac strapped onto him. 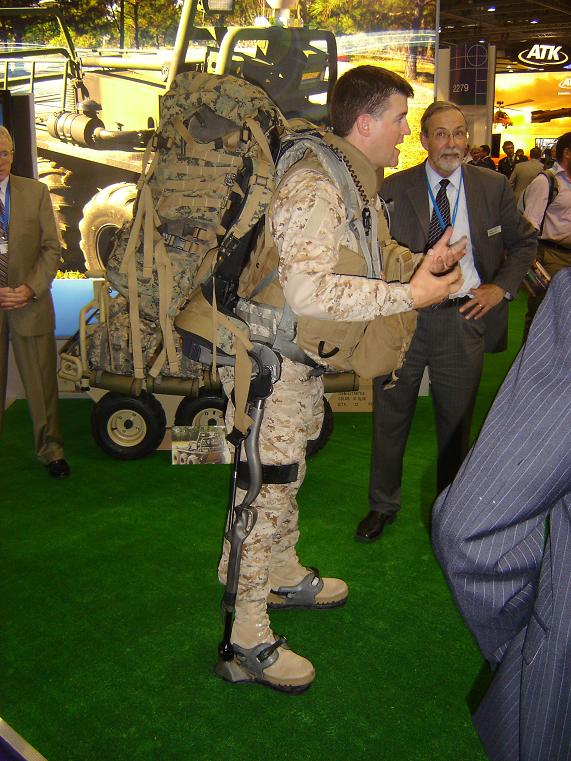 The exoskeleton inventor was careful not to tread on any toes.

Russdon Angold is an engineer from California. To the accompaniment of an occasional loudish whine as his suit's electrically-driven hydraulics cut in and out, he briefed the Reg on the Human Universal Load Carrier (HULC™) exoskeleton this afternoon.

"We're just at the right stage for this now," said Angold. "Batteries, hydraulics, controls, they've all developed to the point where a machine like this becomes achievable."

Angold and a few colleagues at first developed the HULC on their own through their company Berkeley Bionics. However, the firm was acquired by US defence goliath Lockheed, who are now assisting with "ruggedisation" and further readying of the machine.

The HULC runs on Li-ion batteries, driving lightweight hydraulic legs with titanium structure. A wearer can hang a 200lb backpack from the back frame and heavy chest armour and kit from shoulder extensions.

"I'm just standing here," said Angold, carrying just such a load. "All the weight's carried by the structure." He demonstrated walking around without trouble, and was able to go down to one knee and recover to standing up easily despite having almost 300lb of kit strapped onto him. Readers with infantry experience will appreciate this last feature. Angold himself has no such background, but his brother is a serving US Navy SEAL.

The machine doesn't offer any help to the wearer's arms, but an over-shoulder gantry can be fitted and heavy items such as artillery shells hung from it on a sling. Battery life depends on usage - you can drain the batteries fast by running - but marching slowly at 4kph will allow it to last for 5 hours.

According to Lockheed reps the HULC isn't ready for prime time yet, being still "in ruggedisation". However the company would envisage giving it to actual soldiers so as to get their input from next summer. Field deployment in the event of a customer coming forward would happen at some point after that.

Overcoming inevitable military scepticism may be something of an issue. A senior British officer, present to observe the HULC in action, joked that it would be a major threat to the Army as it could allow more female soldiers in combat roles. He preferred to remain unnamed.

Meanwhile back in the States, rival arms behemoth Raytheon has bought up the competing Sarcos XOS exoskeleton. We asked Angold why his suit's better.

"Because it doesn't have a tether," he said bluntly, alluding to the XOS's well-known inability to stray too far from a power socket. ®