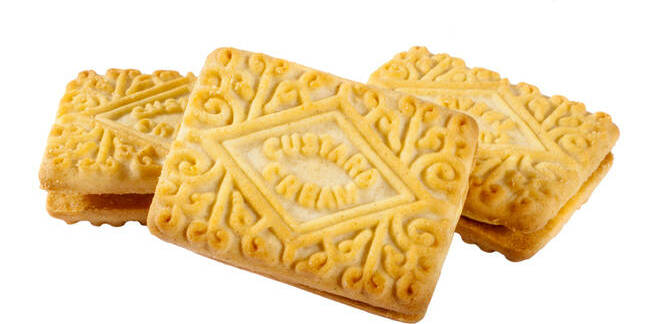 A disturbing probe into the potential for apparently innocent biscuits' ability to do harm has revealed that an astounding 25 million Brits have been injured while indulging in some light coffee/tea break snack action, with 500 victims requiring hospital treatment.

That's according to research outfit Mindlab International, which determined that almost a third of adults had been scalded by hot beverages while dunking, 26 per cent had choked on crumbs and ten per cent had broken a tooth or filling while getting their laughing gear round a biscuit.

Rather more seriously, seven per cent of Britons have dropped a biscuit tin on their foot, three per cent have fallen off a chair reaching for vital nourishment, and an equal percentage have poked themselves in the eye with a biscuit.

Seven per cent admitted to have been bitten while feeding a tasty biscuit morsel to a pet or “other wild animal”. The most extreme example of biscuit-related mishap, however, was the case of the man who got stuck in wet concrete after wading in to retrieve a stray biccy.

Mindlab also carried out a "Biscuit Injury Threat Evaluation" (BITE) to determine which was Blighty's deadliest biscuit. Mindlab International director Dr David Lewis explained: “We tested the physical properties of 15 popular types of biscuits, along with aspects of their consumption such as ‘dunkability’ and crumb dispersal.

“Then one of our mathematicians correlated these findings with research data and responses from a nationwide survey of 1,000 adults.”

The chilling result is that the public would do well to eye the Custard Cream with suspicion, since it topped the list with a BITE risk rating of 5.63. That's compared with 4.34 for your common-or-garden Cookie, in second spot, and 4.12 for next-placed Choc Biscuit Bar.

Those of you who like sucking a Ginger Nut will be relieved to learn that they're relatively risk-free, rating 2.99 in ninth place. Anyone not wanting to chance their arm should stick to Jaffa Cakes, since they bottomed the list with an almost harmless 1.16.

Mike Driver, marketing director for biscuit manufacturers Rocky, which commissioned the survey, concluded: “Working with biscuits every day, we’d long suspected they’re not as innocent as they look - and we were right."

Swiss bankers to get new neighbours in colocation agreement

Where the hell Huawei? It should be a bit easier to tell now the AppGallery has its first proper navigation app

Capita: We are seeking staff to join our board. Just two please

Imagine the kind of luxury custard creams you'd get at that meeting, right proles?

This is a sett-up! Mum catches badger feasting on contents of freezer

Elusive critter loves mashed potato, not so keen on scallops