Intel released nine of its long-anticipated 'Lynnfield' microprocessors on Tuesday - two Core i7s, one Core i5, and six Xeons - with one nifty surprise at the low end of that server and workstation line.

Back before the Meltdown changed Chipzilla's product timelines, the Nehalem-based Lynnfields were expected to launch in the first half of this year. Then the launch slipped to July. This January the rumor mill pegged the Lynnfields to appear right...about...now.

The basics of the Lynnfield line have been known for some time: quad cores, 8MB cache, on-chip 1-by-16 or 2-by-8 PCIe 2.0 graphics controller, Hyper-Threading on most parts, and Turbo Boost to pump up a core's clock speed when other cores aren't being used. The processors are also the first of Intel's parts to pop into the new LGA 1156 socket. 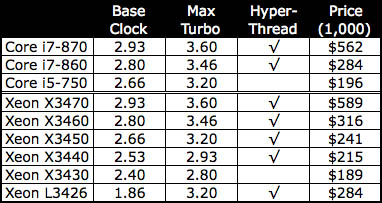 A broad range from which to choose

The Lynnfields support Intel's new P55 chipset - though, being a single chip, the "set" in that term has now been rendered obsolete. The P55 is, on paper at least, an impressive part. It supports up to eight PCIe 2.0 x1 and 14 USB 2.0 ports, and six SATA 3Gb/s ports can be set up in RAID 0/1/5/10 configs based on Intel's Matrix Storage Technology.

The QPI link of the Core i7-900 series has been replaced with a Direct Media Interface (DMI) on the Lynnfields, but our benchmarking of the top-of-the-line desktop part, the 2.93GHz Core i7-870, showed that the switch shouldn't trouble speed freaks.

Intel lists the TDPs of each of the parts as 95 watts - respectable but not exactly earth-shaking. What is a bit of a surprise is the last-but-not-least of the Lynnfields, the Xeon L3426 ($284, £174), with a TDP of a mere 45 watts. Only one existing Xeon designed for single-socket, non-embedded systems - the L3110 - has a TDP that low, but it's a dual-core part with neither Turbo Boost nor hyper-threading.

The L3426 is fully hyper-threaded, and it also enjoys the benefits of Turbo Boost. What's unusual, however, is the range of its boost: from a base clock rate of 1.86GHz to a max of 3.2GHz when only one core is being used. Even the most math-challenged of us can see that the boost is just a hair under 75 per cent.

When we saw these figures in Intel's pre-release spec sheet, we assumed that a typo was involved. After all, the max boost of the other Lynnfields hovers around 20 per cent. But our friendly neighborhood Intel spokesperson insisted that the L3426's boost figures were indeed correct, adding that its low-power nature allows for a far greater boost range.

Expect to find the L3426 in servers at the "S" end of the SMB market - or maybe even in the long-desired Apple Mac mini-tower, seeing as how the single-processor version of that company's Mac Pro line is powered by a Xeon 3500.

And, yes, we're just speculating. And, yes, that's how rumors are born. ®