Worst mugshot ever, with added bite

The powers that be in Florida are holding a man cops have dubbed "Dracula", and who's certainly a contender for the worst ever mugshot trophy. 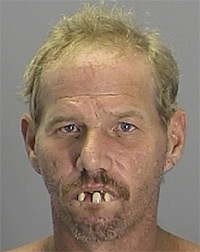 Dale Alan Lee. 43, was arrested on an aggravated battery rap after allegedly stabbing a man in the stomach in Dade City.

One shaken officer admitted: “It was hard to keep a straight face when the mugshot was taken. No one has ever seen teeth that bad."

Lee - no relation to Christopher, we hasten to add - is being held in Land O'Lakes Detention Center on $10,000 bail pending an appearance before, presumably, judge Abraham Van Helsing. ®

But is remote working less productive?

If you're serious about browser privacy, you should probably pass on Edge or Yandex, claims Dublin professor

US court rules: Just because you can extract teeth while riding a hoverboard doesn't mean you should

We get it. You are a skilled dentist. Sorry, 'were'