Limited outbreak of common sense at the MoD?

DSEi The Ministry of Defence has announced a new £150m purchase of hi-tech weapon sights and optics, saying that the new kit will "improve soldier lethality" and "support the British defence industrial base". Serving soldiers have disparaged only a little of the new kit - and much of the money will in fact be spent overseas. 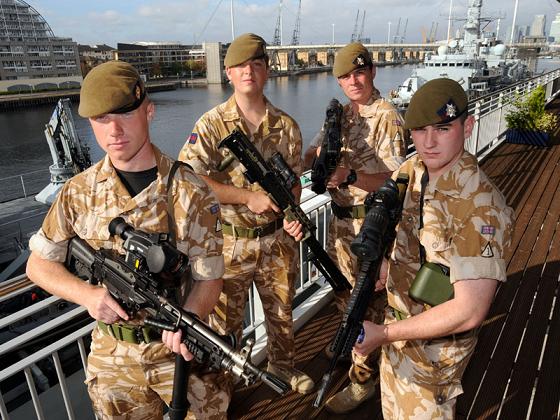 Here's looking at you.

The new purchase was announced earlier this week at the DSEi arms fair in London, with prime contractor Thales UK keen to show off the new gadgetry for use by British troops fighting in Afghanistan. The £150m will come from funds earmarked for the UK's Future Integrated Soldier Technology (FIST) programme. Troops will receive the following new bits of kit, which the Reg has since discussed with serving infantrymen:

• Underslung 40mm grenade launchers, which have been fitted beneath the rifle of one man in each fire-team of four since 2003, will now get new sights - and also new "fire-control systems". The 40mm launcher is a low-velocity weapon and has to be pointed high above the target in order to lob its grenades any distance, a process which calls for range to be estimated accurately.

The new fire-control gadget to be mounted alongside the launcher will use a laser rangefinder to work out the correct elevation angle automatically - but our military sources say it makes the rifle/launcher combo unrealistically heavy for combat use, and that troops will find ways to get rid of it.

• Thermal sights will be provided for rifles, marksman's weapons and light machineguns. These can be used to detect hidden enemies and bombs while on patrol, and function even in total darkness - when the regular light-amplifying night vision gear now in use doesn't work. This stuff is already in use by some units, and is considered good by our sources.

• New Lightweight Day Sights will be provided, replacing the SUSAT* sights which came in when the SA80 weapons were introduced during the 1980s. SUSAT was very popular in its day (unlike the SA80s, which were only sorted out twenty years later in a German factory), but according to our sources the new sights are much better, offering improved field of view and a clearer picture. "A gleaming bit of kit," we're told.

• The new thermal scopes, in a popular bit of good sense, have open Close Quarter Battle Sights mounted on top of them. This means that a soldier in a close-up gunfight doesn't need to peer through a scope as he shoots, and lose track of what's happening around him. This gets the thumbs up as well.

• Fire-team commanders will get new "Target Locating System" binoculars containing laser rangefinders and digital compasses, allowing them to mark things they see accurately on a map. This is actually quite basic stuff nowadays, and even in the British army forward artillery spotters and similar specialists have had such kit for some time. It's new for ordinary infantrymen to have it, however.

There is the option to hook up the binos to a sat nav and a data net, so calculating the coordinates of a target and sending them to other units automatically, but it wasn't clear at DSEi how much of this capability will be delivered to British infantry and our informants were also unsure. One does note that the only current option for infantry data transmission, the Bowman section-leader's radio, has a very poor reputation.

• There will also be some ruggedised digital cameras and simple periscopes for peering over walls and round corners without getting shot. The FIST project was originally expected to include on-gun cameras feeding an image to a helmet display for this sort of purpose (those ignorant of shooting realities also thought the weapon might be fired usefully in such a position). It seems that an outbreak of realism has occurred in the MoD.

Next page: Supporting British industry, eh? Not so much, actually
Page: