A radical space company which counts an ex-NASA space station commander among its executives says it will offer week-long tourist trips in space from 2013 for just $35m. Apart from basic capsules the company has acquired - and may in future deploy - a fleet of 1970s Russian military-surplus armed orbital spacecraft. 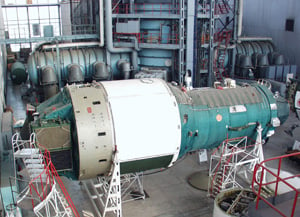 Cruise in space aboard our luxurious ex-warship.

Flight International reports that spaceflight firm Excalibur Almaz - which recently announced itself to a gobsmacked world - has now gone firm on its multimillion-dollar tourism plans. It seems that the company has conducted a market study indicating that people are unimpressed with such cheapo initiatives as Richard Branson's sub-orbital joyride venture Virgin Galactic, which offers a brief lob out of Earth's atmosphere for a comparatively pocket-pleasing $200k-odd.

Excalibur Almaz say that's a completely pointless waste of money, when you could cough up $35m for a week in proper orbit. Tourists, research organisations and other customers for such flights represent a $1bn annual market, according to their survey.

The company plans initially to send people up on a Russian rocket stack atop which will sit a Russian military-surplus "Almaz" (Diamond) reusable re-entry vehicle (RRV) capsule attached to a larger service module now being worked on for Excalibur Almaz by Euro space giant EADS Astrium.

After a week or so spent orbiting the Earth in the service module, the three-person complement would take seats in the Almaz RRV - some of which have already been fired into space and recovered without mishap back in the 1970s, though never with people inside. (The Soviet Proton launchers used back then were considered to have an unacceptable likelihood of blowing up on takeoff.) The RRV would re-enter and descend to a soft landing using parachutes and retro-rockets, while the service module could later be de-orbited and destroyed.

Space-shuttle and Soyuz flight veteran (and one-time commander of the International Space Station) Leroy Chiao, now technical chief for Excalibur Almaz, says the company has already opened talks with Russian space agency Roscosmos regarding a launcher. He told Flight that he wants a rocket selected by next year so as to stick to the 2013 first-launch deadline, and that Roscosmos chief Anatoly Perminov "publicly pledged to support our project" this summer.

The firm is eyeing either a modernised Proton launcher or the one used by today's manned Soyuz flights, which would lift off in either case from the Russian space base at Baikonur.

Apart from its fleet of old RRV capsules, now being upgraded with modern life-support and electronics, Excalibur has also acquired some surplus Almaz orbiter spacecraft, the 1970s manned space vessels whose crews were to travel up and down on the RRVs. These secret military spaceships were intended to spy on the Soviet Union's cold-war enemies from on high, under the pretence that they were civilian "Salyut" research stations.

In fact, owing to the dodgy rep of the Proton launcher at the time, the crews had to use Soyuz capsules rather than Almaz RRVs. As things turned out, the two space spy stations which were successfully put into orbit spent most of their time operating uncrewed under remote control from the ground. Both the Soviets and the US subsequently found that crewless spy satellites were more cost-effective.

However in the early days of Almaz and the US "Manned Orbiting Laboratory" spy-ship scheme it was thought in some quarters that the world was on the brink of possible extra-terrestrial war. At least one of the Almaz orbiters was secretly armed with a powerful automatic aircraft cannon, intended for use in the event of a space battle with American craft and test-fired in orbit.

Doubtless the gun turrets have been removed from Excalibur Almaz' surplus Soviet starwarships. Even so, the chance to spend a week cruising above Earth aboard a former space gunboat could be a useful selling point. ®