Not true: The one in the car is actually quite useful

US motor mammoth Ford have made a bizarre claim to have incorporated radar technology from the renowned F-22 Raptor - the most secret, most expensive fighter plane in the world - into a new mid-range family car. Amazingly the claim has been accepted without question by the BBC. 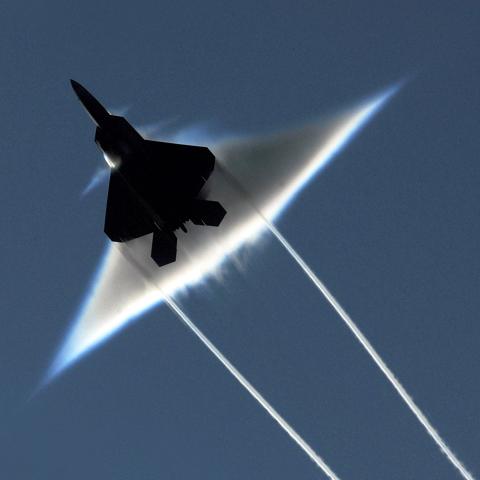 Apparently driving a Ford Taurus is just like this.

The good old Beeb reports as of Saturday under the headline "car harnesses fighter jet technology" on Ford's promotional visit to San Francisco touting its newly pimped-out Taurus. The Taurus was once Ford's bestseller, but was axed a while back as it became old hat. Now the troubled motor globocorp has revived the name, hoping to bring back the good old days.

But this isn't your father's Taurus, as it were. According to Ford's "Global Chief Safety Engineer":

This Delphi Radar in the vehicle is third generation, it's a phase array radar, with no moving parts... This radar tracks over 100 targets and can lock into 64 targets at a time.

BBC tech scribe Maggie Shiels adds that "Ford said the F-22 radar technology which they took and built upon was all open source".

It would seem that the only real similarity between the Delphi safety equipment (pdf) and the AN/APG-77 set mounted in the Raptor is that both are electronically scanned - that is they don't swivel or rotate an antenna to sweep the sky or road in front of them. Rather, a solid-state assembly generates a beam electronically which can be projected anywhere across a wide arc - 90 degrees for the Ford Taurus, 120 for the Raptor.

Other details on the AN/APG-77 are sketchy and usually - far from being open source - absolutely if-I-told-you-I'd-have-to-kill-you secret. However, one can be sure that it will track or "lock into" (normally the same thing) a hell of a lot more than 64 or even 100 targets. It also seems certain that the Raptor can detect things a bit further off than 174 metres, which is the Taurus' best effort.

Other features of the superfighter scanner include spread-spectrum invisible operation to avoid compromising the radar cloaking of the Raptor, and the ability to act as a blistering gigabit-grade wireless data link - or even, rumour has it, a circuitry-frying electronic raygun.

Ford claims none of this for the Taurus, and really it does seem a bit overdone to even speak of the two radars in the same breath. One is possibly the most sophisticated radar in the world, the other is one of the least. It's as if someone had said a car incorporated the same technology as Jodrell Bank because it had a radio in it.

And then there's the fact that if anything at all from the Raptor were in the Taurus, it could never be sold to anybody except the US armed forces without a major international agreement sanctioned by Congress. At least one distinguished analyst comments:

"MASSIVE FAIL... If Ford appropriated a single line of software code from the F-22 radar the government would instantly shut down the Taurus' Chicago assembly plant until it complies with [US arms-tech regs]."

There is also one other point to note on the total dissimilarity of the AN/APG-77 and the Delphi. At the moment the AN/APG-77 - unlike the Taurus set - can't actually be used effectively against targets on the ground*. As the US armed forces are currently locked in combat round the world with enemies who are found solely on the surface rather than in the sky, this is rather embarrassing and an urgent effort is under way to modify the Raptor radar.

Just for now, though, you have to say that the one in the Taurus is rather more useful. ®

*There is a big programme under way to sort this out and add Synthetic Aperture Radar (SAR) ground-tracking to the AN/APG-77. Reportedly, modified AN/APG-77(V)1 modified hardware has been included in Raptors produced from Lot 5 (2007) onwards, and the necessary software changes have now been tried out in testbed aircraft. However the software development was described as being in the first phase of a planned multi-year contract as of last year, and it has previously been stated that the SAR "robust ground attack" capability won't be up and running sooner than 2010.