Shadow icebergs of the lunar antarctic 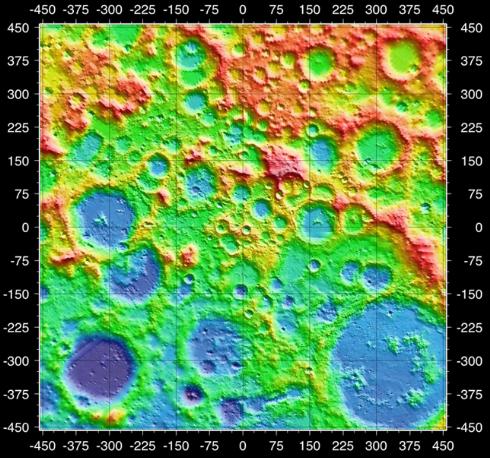 One of the LRO's main missions is to find water on the Moon, which would make it far less expensive and difficult to establish manned bases there. The deep crater bottoms of the lunar antarctic are considered to be a particularly promising place to look, as they are permanently in shadow - never receiving any sunlight which could evaporate ice deposits. It's also impossible to peer into the craters with Earth-based telescopes as their walls hide the bottoms from view, which is one reason why the LRO has been sent out.

According to a NASA statement released yesterday:

First results from LRO's Lunar Exploration Neutron Detector, or LEND, indicate that permanently shadowed and nearby regions may harbor water and hydrogen. Additional observations will be needed to confirm this. LEND relies on a decrease in neutron radiation from the lunar surface to indicate the presence of water or hydrogen.

"If these deposits are present, an analysis of them will help us understand the interaction of the moon with the rest of the solar system," said Richard Vondrak, LRO boffin at NASA's Goddard spaceflight centre in Maryland.

The space agency goes on to add:

According to the first measurements from the Diviner instrument [on the LRO] large areas in the permanently shadowed craters are about minus 400 degrees Fahrenheit (33 Kelvin), more than cold enough to store water ice or hydrogen for billions of years.

If minable icebergs are found in the lunar antarctic this would be good news for any future Moonbase programme. Astronauts and/or robotic machinery could harvest the icy bounty and crack it using electricity into hydrogen and oxygen, so creating a supply of rocket fuel. This would mean that outbound ships from Earth wouldn't need to haul all the return-voyage fuel along, greatly increasing their payloads. Such supplies would also make life support easier.

But even if the LEND neutron traces are right and there's ice in them thar craters, there are still problems ahead. NASA says that the Lunar Orbiter Laser Altimeter, or LOLA, indicates that the possible berg-bearing regions are rough badlands, difficult for rovers or suited ice miners to traverse or for lander ships to set down on.

Then there's the matter of power. The sunless crater deeps would rule out the use of solar cells, the mainstream means of 'leccy generation in space. There are likely to be permanently-sunlit areas up on the polar crater lips, which would be good news for solar as most of the Moon suffers weeks-long nights, but getting the ice and the power together could be tricky. It may be that nuclear energy is the only practical lunar option.

Assuming NASA can find ways round all these problems, it may still not receive the funds it needs to build a Moonbase. It's now widely acknowledged that the agency's budget as assigned by Washington is inadequate for any serious manned space effort, and the Obama administration is still deciding what to do about that.