Inside the (half-baked) tech preview

Review The arrival of an online version of Microsoft Office is a significant event, especially after IDC's Melissa Webster reported that nearly 20 per cent of companies already use Google Docs (if not exclusively). Last week, Redmond released an invitation-only Technical Preview of Office Web Apps. But does it have what it takes to fend off the likes of Google, Zoho, and Adobe's Acrobat.com?

It's a tough question to answer, since much of it is not yet done. This is one of the least complete Technical Previews that I have known Microsoft to release, raising doubts about whether it will be ready in time for the release of Office 2010, set for the end of June next year. In the current preview, only Excel and PowerPoint documents can be created and edited online, and OneNote is not yet supported at all, though it is promised for the final release.

I soon found other shortcomings. Opening online documents in desktop Office did not work on the Mac, for example, even with Office 2008 installed. On Linux with Firefox 3.5, the Web Apps did not work at all. The Excel Web App does not support printing. There is no sign of the promised ability to embed a PowerPoint deck in a web site, which sounds a good feature even though rivals like SlideShare already do it nicely. Performance is generally poor, errors abounded, and there is also the question of whether users will be satisfied with the limited set of editing tools currently on offer.

How limited? That too is difficult to answer, since Microsoft says the feature set will change based on feedback during the preview. Some aspects are impressive. Online Excel, for example, seems to support most if not all the formulae present in desktop Excel, but you cannot freeze header rows, merge cells, or insert a new worksheet - to mention just three of countless missing features.

Web Office Excel toolbar: What you see if what you get 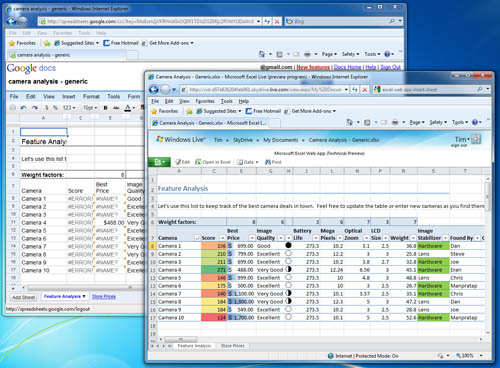 What you are meant to do when encountering editing limitations is to click the "Open in Excel" button. Microsoft says this is because most people prefer to work in the rich desktop client, though the fact that the company makes a large part of its profit by supplying Office licenses can hardly be ignored. If you do open a document in Office, it will save directly back to its online source, although the feature is slow and unreliable in the preview.

The Web Apps seem to be built around the new Open XML document formats. You can open the older Office formats, but they are read-only unless you save into the new format, which is not ideal for broad compatibility. Another snag is that spreadsheets driven by VBA will not work.

A key feature of Office Web Apps is collaboration - though in the preview, this only works in Excel. You can share a document with others and enjoy simultaneous editing, but I found this problematic in practice because there is no indication of what another person is currently editing. This means you can inadvertently overwrite another person's work. Once again, this may improve in later iterations of the product.

Next page: The SharePoint connection
Page: