MIT boffins have devised a method of fitting a chip on the end of the optical nerve which can be used to input electronic images directly into the brain without any need for an eyeball. The technique could offer blind people a degree of vision using head-mounted camera/sensor equipment, in the style of Geordi LaForge from Star Trek: The Next Generation. 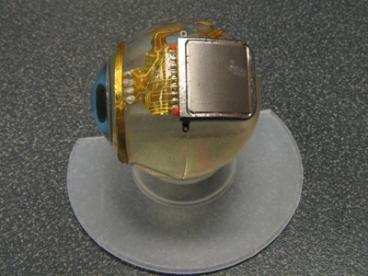 Video straight to the brain.

The implanted chip, according to the MIT team behind it, features a "microfabricated polyimide stimulating electrode array with sputtered iridium oxide electrodes" which is implanted into the user's retina by a specially-developed surgical technique. There are also "secondary power and data receiving coils".

Once the implant is in place, wireless transmissions are made from outside the head. These induce currents in the receiving coils of the nerve chip, meaning that it needs no battery or other power supply. The electrode array stimulates the nerves feeding the optic nerve, so generating a image in the brain.

The wireless signals, for use in humans, would be generated by a glasses-style headset equipped with cameras or other suitable sensors and transmitters tuned to the coils implanted in the head.

For now, however, the system has only been tried out in Yucatan minipigs. Three of the diminutive Mexican porkers have had the Star Trek/Gibsonesque implants for seven months, but as yet it's difficult to tell just how well they work - as the pigs aren't talking. The MIT boffins have fitted them with instrumented-up contact lenses to try to get an idea of what effects the implants have.

However a new implant design which would be suitable for humans has now been developed. The development team hope to begin trials within three years. They believe that with feedback from test subjects they'll be able to refine the algorithms driving the stimulator array to give useful results - but they don't promise anything like full vision, or anyway not for a long time.

"Anything that could help the blind see a little better and let them identify objects and move around a room would be an enormous help," says Shawn Kelly of MIT's Research Laboratory for Electronics, one of the designers.

Full details of the pig trials and other tests in vitro are to be published next month under the title Development and Implantation of a Minimally Invasive Wireless Subretinal Neurostimulator in the journal IEEE Transactions on Biomedical Engineering. The article is also online here for subscribers. ®