NASA has shifted the planned impact point of its Lunar CRater Observation and Sensing Satellite (LCROSS) Moon-attack probe, based on new data which indicate its first choice might not contain as much hydrogen as the water-sniffing mission was looking for.

The agency recently announced that LCROSS would impact on the lunar surface on 9 October in a small crater on the edge of the 48-kilometre-wide Cabeus A, situated in the Moon's south polar region.

However, it now says that "based on continued evaluation of all available data and consultation/input from members of the LCROSS Science Team and the scientific community, including impact experts, ground and space based observers, and observations from Lunar Reconnaissance Orbiter (LRO), Lunar Prospector (LP), Chandrayaan-1 and JAXA's Kaguya spacecraft", the suicide mission will now end in a 98-kilometre-wide crater called Cabeus.

According to LCROSS principal investigator Anthony Colaprete of NASA's Ames Research Center, collected data "show a lot of hydrogen" in the new target site. He did, though, admit to New Scientist that the view of the expected plume of debris from the impact could be blocked by "a large mountain that's about six kilometres tall or so on the northern side of the crater", meaning that "the ejecta has to fly up higher before it becomes visible to Earth observers".

Nonetheless, the LCROSS team hopes that the Infrared Telescope Facility in Hawaii, the Magdalena Ridge Observatory in New Mexico, and the MMT Observatory in Arizona will be able to capture the action as the ejecta plume rises to around 10km.

NASA has also asked amateur astronomers to do their bit. Jennifer Heldmann, lead for the LCROSS observation campaign, said: "We expect the LCROSS impacts to be observable in 10- to 12-inch telescopes, so we are actively soliciting observations from the amateur community.

"We're encouraging folks to go in their back yard, planetariums, science centers – collect observations of the impact, and then send those to NASA."

The LCROSS team will now "continue to refine the exact point of impact within Cabeus crater to avoid rough spots, and to maximize solar illumination of the debris plume and Earth observations". 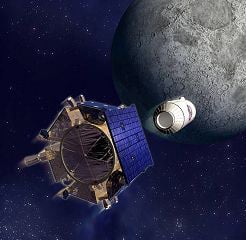 NASA explains: "As the ejecta rises above the target crater’s rim and is exposed to sunlight, any water-ice, hydrocarbons or organics will vaporize and break down into their basic components. These components primarily will be monitored by the visible and infrared spectrometers.

"The near-infrared and mid-infrared cameras will determine the total amount and distribution of water in the debris plume. The spacecraft’s visible camera will track the impact location and the behavior of the debris plume while the visible radiometer will measure the flash created by the Centaur impact."

Its job done, LCROSS's mission will also end in an almighty bang on the Moon's surface.