There's an app for that, and it knows where you live

Customers of ID Mobile's MogoRoad iPhone application are complaining that they're getting sales calls from the company, a process which turns out to be technically a piece of cake.

The proof of concept was put together by Mac4Ever who created an iPhone app which displays the handset's phone number. Passing that back to a server is obviously trivial, and could easily trigger the kind of sales calls about which downloaders of MogoRoad are complaining. 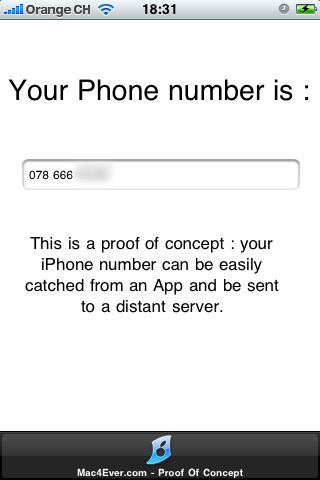 Mac4Ever demonstrating how easy it is to grab a phone number

Users commenting on the Swiss iTunes store are upset that their personal data has been uploaded*, and is being used to try and sell them stuff.

But there are uses for such a thing, and it seems the later versions of the iPhone SDK include a call to retrieve the number, with all the privacy concerns that implies. Apple works hard to ensure that the customer's relationship is with Apple, and no one else, so it's hard to imagine that behaviour like this isn't going attract attention from Cupertino.

We contacted Apple, and ID Mobile, but neither of them has yet got back to us on the matter. ®

* ID Mobile has now been in touch, and tells us that numbers are harvested by sending an SMS and snagging the sender's number on receipt, rather than the clever tricks demonstrated by Mac4Ever, but the threat, and the customer irritation, both remain.