Brierstown connects to Langwell and is what Intel calls a Mixed Signal Integrated Circuit (MSIC). It's something of a grab bag of parts. For instance, it houses Moorestown's audio codec circuitry and the touchscreen controller. It also integrates a lot of lesser electronic components - clock chips and the like - which helps keep Moorestown's overall size down. Menlow required up to 800 of these chips, capacitors and so on, depending on configuration. Many of them are a result of its PC-oriented past. Moorestown, with its handheld-specific design and level of integration gets these power consumers down to half that total. 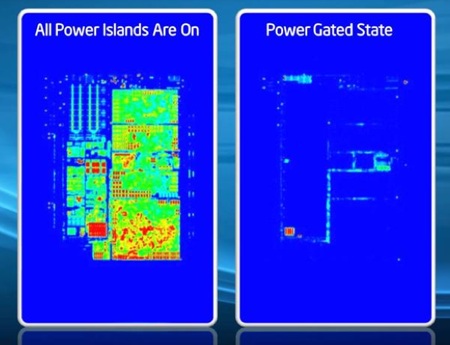 Power gating allows entire sections of chip to be turned off

A compact Menlow motherboard comes in at around 8500sq mm - a Moorestown board should be half that: 4250sq mm. Future platforms, most notably 2011's 32nm 'Medfield', should reduce that even further, perhaps down to 2833sq mm.

Bringing these into Briertown reduces size and power consumption, but the MSIC's real contribution to Moorestown's power characteristics is as the system's main power monitor and arbiter. It takes the feed from the system's temperature sensors - those in the host device, and those in Langwell and Lincroft - and, on the basis of the power management policies, tells Lincroft's PMU what components to close down and to re-activate.

Langwell also has its own PMU, and Briertown directs that too, again powering down islands of functionality that are not currently needed then re-energising them when they are.

That temperature information can be used to do some clever performance-boosting tricks. If Lincroft's CPU is under load but the chip's overall thermal output is below TDP - perhaps because the video and graphics engines have been powered down - Brierstown can tell Lincroft's PMU to push up the CPU core's operating frequency and voltage.

The result is a burst of performance - in excess of 1GHz, Intel has said - that gets the CPU job done more quickly. When the task is complete, the OS' power management system can send the CPU back into an idle state. 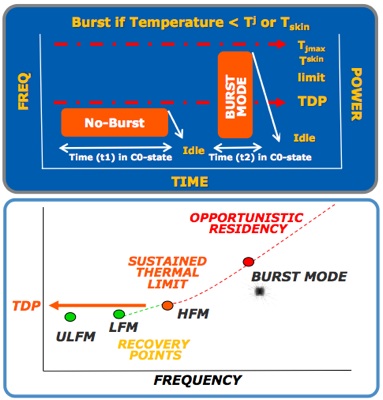 Intel reckons it's better to take a quick hit on power consumption by dynamically overclocking Lincroft's CPU when appropriate - it'll do so for just a few milliseconds at a time, says Intel - than to keep the CPU running a task for longer but at a slightly lower frequency. The sooner it can get the chip back to an idle, powered down state, the longer the battery will last.