Simulated urine to be brewed from vinegar, baby shampoo

NASA has announced a competition for US schoolchildren, in which nippers across the nation will build urine-recycling systems for use in future Moon colonies. The space agency will helpfully furnish instructions for creating a "simulated waste stream" from common household ingredients. 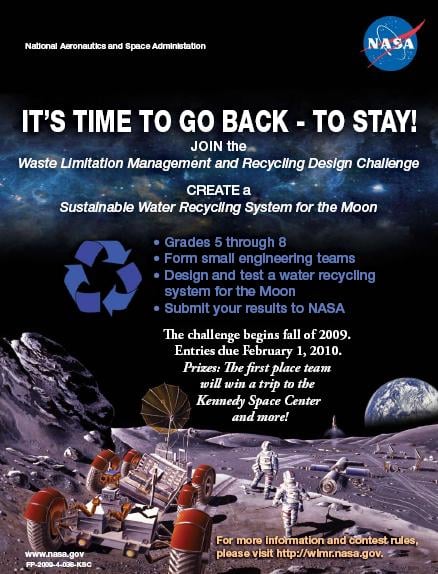 The astronauts couldn't wait for a refreshing glass of cold piss.

If a one-liter bottle of water costs $20,000, what would you do? That may sound like a silly question but it's a real problem. Transporting supplies, including water, to the International Space Station (ISS) costs about $20,000 per kilogram!

In the third decade of this century, astronauts will be living and working on the Moon. Transporting water to the Moon for drinking, cooking, and cleaning will be far more difficult and expensive than carrying it to the ISS. What would you do?

The solution as used aboard the ISS, of course, is the famously buggy, quarter-billion-dollar Urine Processor Assembly. This takes astronauts' restroom surplus and filters it into lovely crystal-pure refreshments, removing the need to ship water supplies up from Earth at $20k per bottle. Golden fluid in low orbit may not quite be worth its weight* in actual gold - a litre of fluid masses about the same as $35,000-worth of gold, at current prices - but it's in the same ballpark. Once the UPA has processed 12 tonnes or so of astronaut juice it will have paid for itself.

For the future, however, NASA has its sights set on the Moon - or it has pending the outcome of a funding review, anyway. Though it's now known that there is water to be found on the lunar surface, it seems to be present only in tiny amounts and supplies may be as restricted as they are on the ISS - if not more so, considering the vastly greater cost of shipping stuff from Earth. On the Moon, urine will probably be far more valuable than gold - every drop must be reclaimed.

Step forward then, schoolchildren of America, and enter the Waste Limitation and Management of Resources Design Challenge (WLMR - DC) from NASA. Full instructions for teachers wishing to enter nippers into the WLMR-DC will be issued shortly, it seems. The forthcoming pamphlet Recycling Water on the Moon will include full details on the compo, and "most important, it provides the recipe and instructions for creating the simulated waste stream needed for the WLMR DC".

No doubt fortunately for classroom hygiene, American nippers won't be required to self-source the "waste stream" as future Moon residents will. According to NASA, they will instead produce a synthetic urine/waste-water mixture. The formula will apparently call for "tap water, household ammonia cleaner, white distilled vinegar, baby shampoo, table salt and baking soda".

The design of the filtration system is left up to the kiddy inventors. The re-wee reclaimer judged best will win its creators an all-expenses-paid VIP trip to NASA's Kennedy Space Centre in Florida. ®